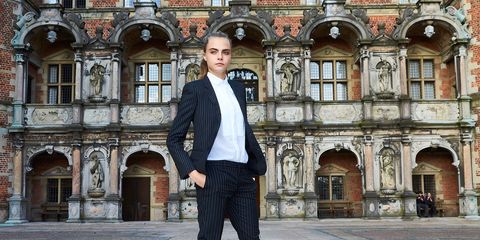 Cara Delevingne comes from a privileged background, and that's something she's well aware of. But growing up, it was hard for the model-turned-actress to reconcile her privilege with her own emotional turmoil—which lead to depression and suicidal thoughts.

In a new interview with Esquire UK, Cara says her depression first manifested when she was a child struggling to understand her mother's addiction to drugs.

"She was sick a lot, in hospital a lot, and there were times when she would leave for quite a long time and I wouldn't know where she was. I didn't feel like I had any control of anything in my life so I just kind of went on a food strike. I was like, 'I'm not going to eat until someone tells me where she is.' I remember my sister, Poppy, saying something like, 'Mum used to do heroin.' And I was like, 'What the f*ck is that? Like heroes and heroines?' I was a tiny child. Like, 'I have no idea what you're talking about.'"

At 16, Cara had a "mental breakdown" due to repressing her emotions and trying to please her parents.

"I was suicidal. I couldn't deal with it any more. I realized how lucky and privileged I was, but all I wanted to do was die. I felt so guilty because of that and hated myself because of that, and then it's a cycle. I didn't want to exist anymore. I wanted for each molecule of my body to disintegrate. I wanted to die. I would run off to the woods and smoke a pack of cigarettes and then I would smash my head so hard into a tree because I just wanted to knock myself out."

Cara went on medication at 16, but felt like it numbed her. "I didn't feel shit. It was horrible. I was like a sociopath," she said. "I hate meds. I think they saved my life and they've probably saved my mother's life but I don't agree with them. It's so easy to abuse them."

The Suicide Squad actress stopped taking medication when she was 18, and in the space of one week lost her virginity, "got into fights," laughed, and cried. Her final thoughts on the matter? "I get depressed still but I would rather learn to figure it out myself rather be dependent on meds, ever."

Mehera Bonner Contributor Mehera Bonner is a news writer who focuses on celebrities and royals.
This content is created and maintained by a third party, and imported onto this page to help users provide their email addresses. You may be able to find more information about this and similar content at piano.io
Advertisement - Continue Reading Below
More From Celebrity
A Slice of Diana's Actual Wedding Cake Is For Sale
Matt Damon Trolled Ben Affleck and Jennifer Lopez
Advertisement - Continue Reading Below
This Old Video of the Queen Saying "Nah" Is LOL
Diana Had a Secret Message on Her Wedding Shoes
Will's Friends Made "Jibes" About Kate's Mom
William Will Suffer "Worst" from Harry's Memoir
Simone's Boyfriend Sent Her the Sweetest Message
Harry's Friends Don't Want to Be in His Memoir
Will & Kate's Modern Approach to Raising George
Meet Simone Biles's Super Supportive Parents