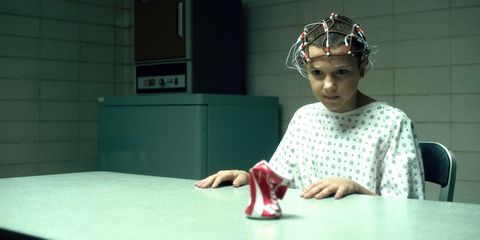 In case you hadn't noticed, Netflix's Stranger Things is a fictional TV show which is in no way real. It takes place in a fictional town with a fictional Energy Department that does shady mind experiments in their free time. However, the real U.S. Department of Energy really wants us to know that a) they are not unleashing monsters into suburban America, b) Christmas lights are not powered by the paranormal, and c) they're a totally nice bunch of cool scientists. Promise!

Bad/good news...the Upside Down isn't real: "There are several scenes in the show where Hawkins Laboratory researchers don full body suits and protective gear to walk through a peculiar portal, which transports them to an alternate dimension known as 'The Upside Down.' While the Energy Department doesn't chart parallel universes, it does help power the exploration of new worlds."

Guys! The Energy Department is super chill! "Actual National Laboratory scientists are among the brightest people in the world, working hard to solve the nation's toughest energy problems."

In the event that you think Christmas lights are evil, they aren't: "Electric current actually powers Christmas lights, not monsters or other lifeforms. Christmas light bulbs illuminate when electricity travels through a closed circuit, passing over a filament, causing it to glow brightly."

Still not convinced? To borrow a hilarious hyperlink from the Energy Department, "learn more about how Christmas lights work."