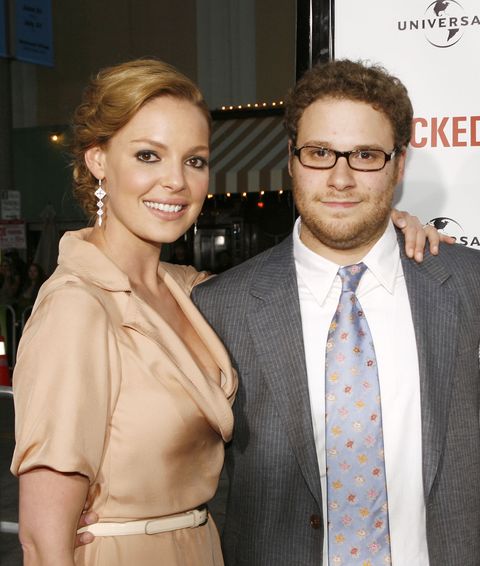 Remember when Knocked Up came out and you were like "yay, this movie is the greatest!" and then Katherine Heigl infamously slammed the film, saying it "paints the women as shrews," and you were just like 😳 ? Well, Seth Rogen is finally ready to bury the hatchet after accusing Heigl of being a hypocrite who says "bat shit crazy things."

Some highlights from his recent Howard Stern interview on the topic:

On the filming Knocked Up: "I thought we had a great dynamic. People seemed to like it. We were funny together. I was having a really good time, and then when I heard afterward that she didn't like it, that she seemed to not like the process, and she didn't like the end product either. I think when that happens—also your trust feels somewhat betrayed."

On the potential damage to Heigl's career: "I respect the fact that perhaps she realizes that it hurt her career, and I don't want that to have happened to her at all. I've said a thousand stupid things and I really like her. A thing like that, especially if she's being honest…the only people who in this situation that it should take away from in this situation is me and Judd."

On running into Heigl after her comments: "Maybe I just have a worse poker face than I thought. In my head, it was not an unpleasant interaction. I thought she hated us. We made a movie. I was very proud of it. It was critically very well received. It financially was probably still my most successful movie, I think, and then we just heard that she didn't like it. And it seemed like she didn't have a good experience making it and didn't think the product was reflective of how she thought she should be portrayed...I would imagine that my reaction was more of surprise…and I was probably confused about what the f*ck was happening."

Look, not to cause *drama,* but did Katherine Heigl really do anything wrong here? Yeah, biting the hand that feeds you is a little iffy, but all she said was that perhaps Knocked Up, a movie celebrating bros being bro-y, is just the tiniest bit sexist. It's possible to both appreciate a film and understand its flaws—especially when it comes to the depiction of women.