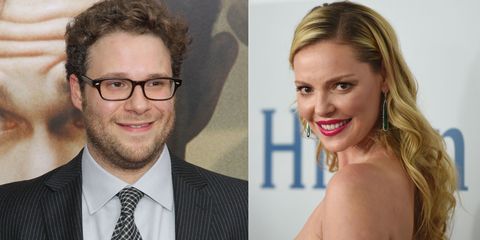 Seth Rogen recently dished some thoughts and feels on his decade-old feud with Katherine Heigl, and she's taken time out of her schedule to respond. Sigh, don't you love it when drama resurfaces ten years later and everyone makes up?

In case you need a quick refresher, Heigl criticized Knocked Up for being ever-so-slightly sexist back in 2007, prompting Rogen to say she's a hypocrite who says "batshit crazy things." But the comedian recently told Howard Stern that—while he did feel "betrayed" by Heigl's comments—he really likes her.

Apparently Heigl feels the same way, because she issued the following statement:

"I think that he's handled that so beautifully, and I just feel nothing but love and respect. And it was so long ago at this point, I just wish him so much goodness, and I felt that from him, too."

It's been a long 10 years, but finally we can go to sleep at night knowing that Katherine Heigl and Seth Rogen are enemies no more.

Also, question: do you think Kanye West and Taylor Swift will bury the hatchet in 2026?