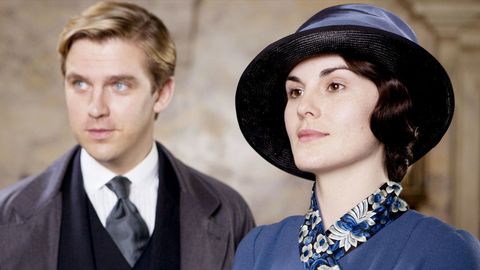 If someone's made a brass band version of the Downton Abbey theme, now would be the time to use it, given how Lady Mary practically just went "PICK ME! PICK ME FOR THE MOVIE!"

In a new interview with the Telegraph, Michelle Dockery echoed what executive producer Gareth Neamesaid in March 2015 (#neverforget): that while the Granthams and their downstairs people no longer occupy a time slot on PBS, they will live on forever in our hearts *and* possibly the silver screen.

"I think there is potential for a film," she said. "That is something I would wholeheartedly consider, so we will see. It may not be over yet."

Plus she and the other actors—probably even those traitors Dead Matthew and Dead Sybil—are all such good buds, it would be almost too easy picking up right where they left off.

"The thing that I miss the most are my cast members," she said. "But we are all still very close."

Meanwhile, I have never related to the following GIF more deeply than I do now.