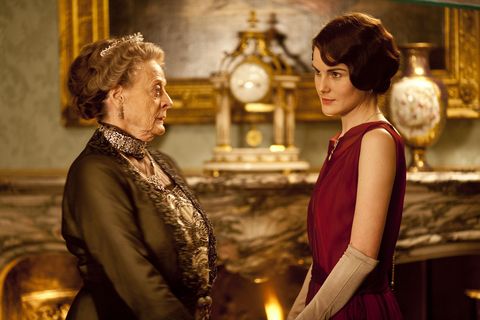 Update, 6/23: With another twist of the tourniquet, Julian Fellowes has made us even more pained/okay about Downton Abbey ending. Here is a recap of the post-apocalyptic DA scraps he's tossed our way:

Add to that a Downton *musical,* which the series' composer says has pretty good odds of making it past the maybe stage, Metro reports. "There's talk of Julian Fellowes and I and some of the cast doing a live tour the way Dr. Who did," John Lunn said. "Seventy percent of it will be music from the show. There might be some Elgar, there might be some jazz of the periods. Some of the actors will likely recite. We'll have a screen. We may have the music live to several scenes. Julian may be the host. I'd say [there's a] 75 per cent chance it will happen."

So...it's like a reenactment? I might pay student rush for that. (Full price if it's on ice.)

Original post, 3/27: There will be no more Downton Abbey after season six. There—Band-Aid OFF.

While you crawl toward the nearest corner to have a good cry/sneak a restorative nip from your flask (no judgement, not today), let me deliver the full news: After multiple traitors floated the rumor, executives confirmed that the show is ending on Christmas Day this year.

"Inevitably there comes a time when all shows should end and Downton is no exception," said executive producer Gareth Neame in a statement. "We wanted to close the doors of Downton Abbey when it felt right and natural for the storylines to come together and when the show was still being enjoyed so much by its fans. We can promise a final season full of all the usual drama and intrigue, but with the added excitement of discovering how and where they all end up."

(You mean gravestones, Gareth? Like the one they just put up for MY HEART?)

All is 99.99999 percent lost, but there's still a microscopic glimmer of hope: Neame said he and Julian Fellowes are "definitely contemplating" a movie based on the soap opera that felt classy because it was British and on at nighttime.

"It would be great fun to do," he said. "I think it would be a wonderful extension of everything people love about the TV show. But I can't confirm that it's definitely going to happen. It would take a lot of planning and thinking about. We shall see."

Ugh, It's True: 'Downton Abbey's Next Season Will Be Its Last

Lord Grantham Says Mary Might Be Getting Her Heart Broken in 'Downton' Season 6, Possibly Edith Too

Chelsea Peng I'm Chelsea Peng, the assistant editor at MarieClaire.com.
This content is created and maintained by a third party, and imported onto this page to help users provide their email addresses. You may be able to find more information about this and similar content at piano.io
Advertisement - Continue Reading Below
More From Culture
Fans Are Ready for Second Season of 'Bling Empire'
What We Know About Part 2 of 'Lupin'
Advertisement - Continue Reading Below
You *Need* to Follow the 'Bling Empire' Cast on IG
Watch the Trailer for the New 'Euphoria' Special
We've Getting a Season 2 of 'Bridgerton'
New Drama Movies That Promise to Move You
The Sexiest New Movies of the Year
A Look Back at Princess Anne's Life in Photos
Where Is the Cast of 'Gilmore Girls' Now?
'The Bachelor' Is Back!