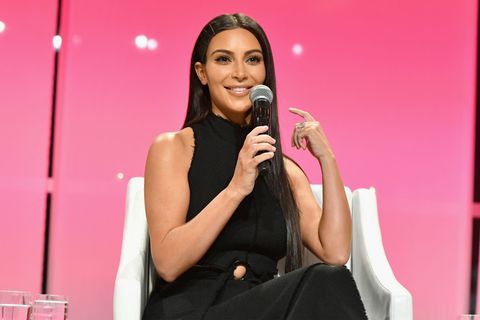 The presidential debates aired on Monday night, and while the "conversation" (read: manterrupt-athon) between Hillary Clinton and Donald Trump was epic/scary, there was a much more important throw-down happening in the village of Calabasas. Naturally, we're talking about the Twitter shade Rob Kardashian directed at his family, who apparently failed to invite Blac Chyna to her own baby shower.

So, to answer your question, no, Kim Kardashian wasn't able to fully watch the debates, because she was dealing with this mess. "I watched a little bit of it but I was on the phone at the same time, a little family drama," she told Andy Cohen at The Girls' Lounge dinner in New York City. "Group texting."

Kim also shared some advice from Kanye West, saying he helped her learn to ignore mean commenters on social media. "I used to look at everything and anything, and have Google Alerts, and just get so upset, and go home and cry after something mean being said—and now there is nothing anybody can say that can even rattle me. I'm proud of that, but in a way it's a little bit sad that that's the time you live in, that people can say the meanest, nastiest things and you can be okay with it."