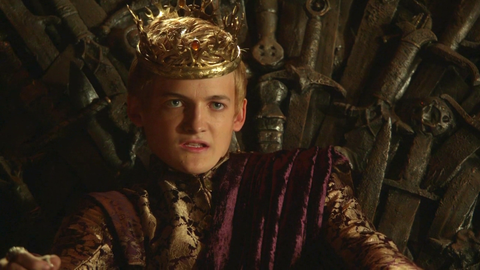 There are only two (shortened) seasons left until the end of Games of Thrones, and as much as we're dreading the demise of our collective TV obsession, we have to admit that we're also antsy to know how everything wraps up.

Well, at this weekend's New York Comic Con, Jack Gleeson, the actor who brought us our all-time favorite love-to-hate GoT character, Joffrey Baratheon, shared his personal favorite theory about how the show will end. And, yeah, it's a really good one.

According to Bustle, Gleeson can't (and doesn't attempt to) take credit for the theory, which he freely admits he heard from a fan. We don't blame him for loving and spreading the theory like neon green wildfire.

The theory perfectly addresses the show's two biggest questions: Who will end up on the Iron Throne and how will the people of Westeros defeat the White Walkers?

"[A fan] came up with this theory that they told me...someone's going to like melt down the Iron Throne because it has the Valyrian steel that will overcome the White Walkers," he told the audience at his New York Comic Con panel. "So, I think that's kind of a cool idea—the monarchy is literally dissolved."

That is a cool theory, Jack. You've officially convinced us. Plus, a cause as big and great as defeating the White Walker zombie army is probably the only thing that could convince a would-be queen as strong-willed as Daenerys to melt down that throne she's been working so hard to obtain.

Kayleigh Roberts Kayleigh Roberts is the weekend editor at Marie Claire, covering celebrity and entertainment news, from actual royals like Kate Middleton and Meghan Markle to Hollywood royalty, like Katie Holmes and Chrissy Teigen.
This content is created and maintained by a third party, and imported onto this page to help users provide their email addresses. You may be able to find more information about this and similar content at piano.io
Advertisement - Continue Reading Below
More From Celebrity
What Happens on Katie's Season?
Katie Holmes' Gingham Dress is Summer Perfection
Advertisement - Continue Reading Below
Ben Affleck Had a Sweet Father's Day Celebration
Selena Talked Being Mocked Over Her Mental Health
Olivia Wilde Was Asked About Harry Styles Romance
Gigi Shared the Sweetest Photo of Zayn and Khai
Meghan Shared the Cutest Update About Archie
Meghan's Heartfelt Father's Day Gift for Harry
Sophie Turner Shared a Sweet Unseen Pregnancy Snap
The Queen Has a Collection of Dog Toys for Sale