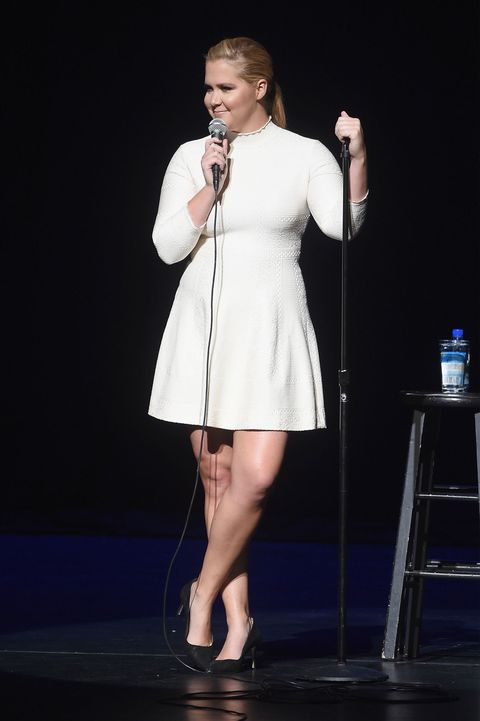 Amy Schumer is so sorry for talking about politics, guys. Truly. On Sunday night, she trashed Trump at an arena show in Tampa, prompting around 200 people to walk out of the packed event. (Somehow, they were shocked that the outspoken comedian was talking politics.) And on Tuesday night, she attempted to make amends with a faux-apology during her show in New York City.

Before the show even started, Schumer issued a "Trump supporter trigger warning" on stage:

And she issued a notice on Instagram promising a "squeaky clean show."

And so are these gals! @rachelfeinstein_ @marknormand and I are putting on a squeaky clean show #msg #tampaapologytour

During her set, Schumer read a sarcastic open letter to the people of Tampa for speaking her mind. And after that, she said she was grateful for that entire audience, even the people who walked out. Here's what she said, via People:

"Dearest Tampa, I'm sorry you didn't want me, a comedian who talks about what she believes in, to mention the biggest thing going on in our country right now. How could I think it was OK to spend five minutes having a peaceful conversation with someone with different views? After the show, I want you to know that I will go straight to a rehab facility that will teach me how to make all people happy. Both the rich, entitled, white people who are gonna vote for him and the very poor people who've been tricked into it! And Tampa, I am so sorry. I shouldn't have said that he was an orange, sexually-assaulting, fake-college-starting monster. Shouldn't have said it. I will never again say that he is an orange, sexually-assaulting, fake-college-starting monster!"

And with that, the show moved on, and Schumer got to more important tasks, like posing in a human pyramid with Madonna, who introduced her at Madison Square Garden that night. Yeah, Schumer's having a really rough time with this whole controversy.