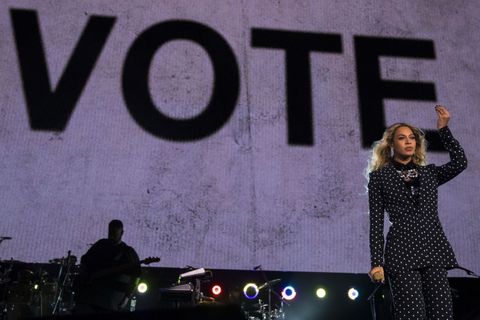 Update, 11/5: Last night, Beyoncé and Jay-Z gave their enthusiastic endorsement of Hillary Clinton at the #GetOutTheVote concert in Cleveland, Ohio. The celeb couple hung out with the presidential candidate during the rally, before taking the stage to voice their support.

Before delivering an epic performance (we'll get to that), Beyoncé gave a rousing speech in which she urged the audience—women in particular—to exercise their right to vote, and let it be known with no uncertainty that she is fully on team HRC:

There was a time when a woman's opinion did not matter. If you were black, white, Mexican, Asian, Muslim, educated, poor or rich, if you were a woman, it did not matter. Less than 100 years ago, women did not have the right to vote. Look how far we've come from having no voice to being on the brink of making history again by electing the first woman president. Yes! But we have to vote. The world looks to us as a progressive country that leads change. Eight years ago, I was so inspired to know that my nephew, a young black child, could grow up knowing his dreams could be realized by witnessing a black president in office. And now we have the opportunity to create more change. I want my daughter to grow up seeing a woman lead our country, and know that her possibilities are limitless. We have to think about the future of our daughters, our sons, and vote for someone who cares for them as much as we do. And that is why I'm with her. If you are ready for freedom, make some noise.

Queen Bey closed out the show (and probably secured the Beyhive vote for Hillary Clinton) with a performance of "Formation" and "Freedom," during which she and her dancers all rocked Hillary-esque pantsuits.

And during "Run the World," she incorporated a Hillary Clinton quote perfectly. 👌

Blue Ivy, lucky four-year-old that she is, got to watch it all go down from backstage:

Beyonce´and Hillary Clinton hugged; Beyoncé, Hillary Clinton andJay-Z hugged; Jay-Z and Beyoncé shared a kiss on stage... Basically it was the magical night that we all needed with just a handful of days left before the election.

Breaking news: it appears as though Beyoncé is taking time out of her busy schedule of slaying to win Hillary Clinton this election. Because let's be real: even the undecided voters among us can agree that Bey has more influence than any politician.

CBS News reports that Beyoncé will join her Instagram Husband Jay Z at a free concert in Ohio on Friday. Will they perform "Drunk in Love" while Hillary awkwardly stands next to them? That remains to be seen. Either way, the concert (which also includes performances from Katy Perry and John Legend) is reportedly aimed at millennials and African-Americans, and will surely inspire the Beyhive to get out and vote.

There isn't a war this army hasn't won, so expect big things.

Mehera Bonner Contributor Mehera Bonner is a news writer who focuses on celebrities and royals—follow her on Instagram.
This content is created and maintained by a third party, and imported onto this page to help users provide their email addresses. You may be able to find more information about this and similar content at piano.io
Advertisement - Continue Reading Below
More From Celebrity
Why Isn't Archie Mountbatten-Windsor a Prince?
A Body Language Expert on the Oprah Interview
Advertisement - Continue Reading Below
See an Adorable New Sussex Maternity Shoot Photo
Why Is the Royal Family Called "The Firm?"
Read Serena Williams' Statement on Oprah Interview
The Internet Reacts to Meghan and Harry Interview
Prince Harry: The Queen Was Advised Not to See Me
The Palace Had Concerns About Archie's Skin
Harry Says Racism Was "A Large Part" Of Leaving
Stacey Abrams on Her Election Wins & What's Next