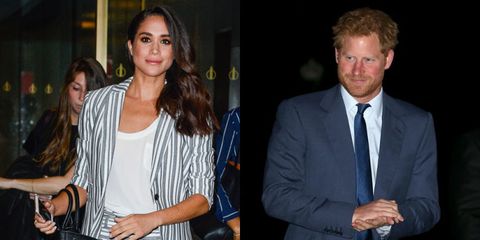 In case you didn't already realize it, the Royal Family has access to the internet and they are reading the things that people write about them and their friends and loved ones. And, when those things are mean, unfair, or just plain hateful, it hurts — because stars (and royals) really are just like us.

Prince Harry just issued a statement through Kensington Palace to address the trolling of his girlfriend, Meghan Markle, and let's just say it makes his feelings about the treatment of his new S.O. very clear. Harry's communications secretary, Jason Knauf, released the one-page open letter to the media/internet trolls/not-so-nice people in general, which tore into those who have made sexist and racist comments about Markle since news of her relationship with Harry broke.

The statement opens with a reminder that Prince Harry knows he's privileged in many ways and that he appreciates the "warmth that has been extended to him by members of the public." He also acknowledges that there's a lot of public interest in his private life and that he's tried to deal with that as best he could, even though he's never been totally comfortable with the lack of privacy.

And then, it gets real.

"The past week has seen a line crossed," the statement reads. "His girlfriend, Meghan Markle, has been subject to a wave of abuse and harassment. Some of this has been very public — the smear on the front page of a national newspaper; the racial undertones of comment pieces; and the outright sexism and racism of social media trolls and web article comments."

In addition to the "sexism" and "racism" Markle has faced publicly, the statement says, there have been private battles that are even more personal and, frankly, more frightening to live with.

"Some of it has been hidden from the public — the nightly legal battles to keep defamatory stories out of papers; her mother having to struggle past photographers in order to get to her front door; the attempts of reporters and photographers to gain illegal entry to her home and the calls to police that followed; the substantial bribes offered by papers to her ex-boyfriend; the bombardment of nearly every friend, co-worker, and loved one in her life."

Because Prince Harry has been playing this game (you know, the "game" of fighting to have any kind of private life, even in spite of his massive, from-birth fame), he also jumped ahead to the argument he knew people were going to throw back at him and shut. It. Down.

"Prince Harry is worried about Ms. Markle's safety and is deeply disappointed that he has not been able to protect her," the statement explains. "It is not right that a few months into a relationship with him that Ms. Markle should be subjected to such a storm. He knows commentators will say this is 'the price she has to pay' and that 'this is all part of the game'. He strongly disagrees. This is not a game — it is her life and his."

And yes, Prince Harry knows that it's not "normal" for a member of the Royal Family to issue this kind of troll-slamming takedown, but TBH, he doesn't seem to care. That's how important his privacy, his relationship with Markle, and her privacy and safety are to him.

"He has asked for this statement to be issued in the hopes that those in the press who have been driving this story can pause and reflect before any further damage is done. He knows that it is unusual to issue a statement like this, but hopes that fair-minded people will understand why he has felt it necessary to speak publicly."

Kayleigh Roberts Kayleigh Roberts is the weekend editor at Cosmo, focused on celebrity news and royals.
This content is created and maintained by a third party, and imported onto this page to help users provide their email addresses. You may be able to find more information about this and similar content at piano.io
Advertisement - Continue Reading Below
More From Celebrity
Princess Beatrice Has Given Birth to a Baby Girl
Gigi Hadid's Mom Shared Sweet Pics of Khai
Advertisement - Continue Reading Below
Kate & Will Probably Won't Have a Fourth Child
Ben & Jen Plan to Spend the Holidays Together
Kate & Will Are "Anxious" About Harry & Meghan
Mandy Moore Calls Breast Pump Emmy's MVP Accessory
Royal Nanny to Get Damages from Interview Scandal
Prince William and Kate Will Focus on Work in 2022
Kate Middleton Shares Prince Louis's First Words
Prince Charles Shares Final Exchange With Philip