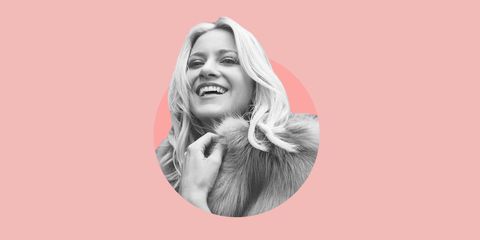 If you're looking for a millennial comedy to get you through the post election blues, say hi to Search Party. The TBS mystery series is crazy cool, crazy smart, and exactly what television needs more of: shows that expose the uncomfortable truths about our generation.

MarieClaire.com spoke to Search Party star Meredith Hagner about playing Portia, a rooftop-partying Brooklynite whose surface-level narcissism turns out to be a lens for so much more.

Marie Claire: I love that your character is this narcissistic Brooklyn hipster, yet she has an unexpected nuance and sadness to her. Did that balance make her appealing?

Meredith Hagner: "I have a tendency to play these really on-the-surface horrible characters, but I try to play them with a little bit of heart. There's a humanity to the character that at first glance seems a little reprehensible. There's some heart there."

MC: So, how do you make a character that seems like the ultimate unlikeable hipster so much more complex?

MH: "The best humor comes from a place of sadness. My favorite comedians draw from the weaknesses in their life. Portia has exaggerated insecurities that I feel in my own life. I like pulling things from my life that I think are funny, or kind of sad."

MC: You've spent time in Williamsburg, which—as anyone who's been to New York City knows—is cool-girl central. Did you draw research from your time there?

MH: "Oh my god, if you can call it research. Just living there, and being at so many rooftop parties for the past eight years. I describe Portia as that person you overhear at brunch, where you're like, are you actually a real person? I have an apartment in Williamsburg and was exposed to young people with a lot of money and not much direction. That's what Portia is to me."

MC: Millennials are often associated with directionless-ness. Is it a relatable concept to you?

MH: "I've been lucky to do creative projects that fulfill me, but that wasn't always my experience. I had a lot of years waitressing, and hoofing it, and going to cattle calls. Going through that daily grind is really hard. There is that millennial question, like 'who am I?' I'm much more comfortable with who I am now, but the show hits on that specifically New York, Williamsburg, 20-something experience."

MC: I feel like there will be inevitable Search Party/Girls comparisons. Girls changed the landscape for shows about millennial women, so are you nervous about said comparison?

MH: "I love Girls and I love millennial comedies, but there's a very clear direction in terms of story, and it's such a specific tone that Michael Showalter created. You're right, there will be comparisons in terms of millennials, but I think that's where the comparisons end."

MC: Showalter's Wet Hot American Summer is one of my favorite movies of all time. Did the movie influence your approach to comedy? And how much of the film's signature vibe should we expect from Search Party?

MH: "I remember watching it in high school, I probably watched fifteen times with my close friends. Just jaw down to the floor. I think there are obviously similar elements to it. Search Party is so its own thing, but it was really exciting being able to work with one of the guys who created Wet Hot American Summer when it was such an influential movie for me."

MC: You were pegged as one of Woody Allen's discoveries during Irrational Men. How did that label impact your career?

MH: "I was such a small part of that movie, but you know, I've been doing this for more than a few years—I had a movie at Sundance I was a lead of. I've had so many things where people are like 'this is going to change your life!' It's not as big of a thing as people think. So no it didn't. Since then, my career has gone in a good trajectory—it's just so funny how you think something's going to change your life."

Search Party airs November 21-25 on TBS, with two new episodes each night starting at 11:00 p.m. ET. Oh, and if you don't own a TV, the entire first season will be available on TBS.com starting November 21.