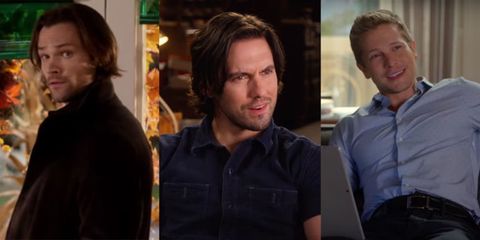 When fans heard that Netflix was bringing us (and, more importantly, the original cast of Gilmore Girls) back to Stars Hollow, one of the first and most persistent questions was about Rory Gilmore's love life. Now, we have our answers (and we're going to talk about them here, so, you know, spoiler alert for those who haven't binged every episode of Gilmore Girls and A Year in the Life yet).

At the end of the original series, Rory is single. She's just graduated from Yale, rejected Logan Huntzberger's marriage proposal, and is getting set to hit the road covering the Obama campaign. This was in 2007.

When we meet Rory again in 2016, she's seeing someone...kind of. I say "kind of," not because it's not a real relationship (it is—they've been together for two years in the first A Year in the Life episode, "Winter"), but because Rory never treats it like one. Her boyfriend, Paul, is doting but apparently forgettable. Lorelai and Luke forget that they've met him, Rory forgets that she's invited him to stay with her family, and is only still dating him because she keeps forgetting to break up with him.

But does Rory end up with Paul the Bland and Forgettable? No. Even though Rory (completely horribly) never remembers to end things with Paul (even as she's sleeping with other people), he does finally break up with her, via text message, minutes before the end of the final episode, "Fall."

This means that Rory is *technically* single at the end of Gilmore Girls: A Year in the Life, but obviously things are much more complicated than that. Here's a brief cheatsheet of Rory's romantic entanglements in the revival series.

Logan Huntzberger: Rory and Logan shippers got their hopes up early on in the revival when, during a trip to London, she stays in Logan's apartment and it's clear that they are still seeing each other. Yes, even though Rory is dating Paul, she's still seeing Logan. And yes, Logan knows about Paul. He's cool with it because he's engaged to a woman named Odette, who lives in Paris and is conveniently never around to be bothered by Rory and Logan's affair.

Because that's what Logan and Rory have—not a relationship, not even a casual fling, but an affair. A premeditated, on-going affair. This lasts throughout the entire revival series, with Rory and Logan finally seeming to go their separate ways after one last hurrah with the Life and Death Brigade in "Fall."

The Wookie: In "Spring," Rory has her first one night stand, with a Wookie. Well, with a guy dressed as a Wookie, who is also a source for a story she's writing. Rory Gilmore, pillar of professionalism and good judgement, sleeps with him while reporting a story for GQ about people who stand in long lines for things. This is while she's having an affair with Logan and still in long-term dating limbo with Paul.

Jess Mariano: Rory and Jess never actually revive their romance in Gilmore Girls: A Year in the Life, but he's still probably the closest thing to a romantic endgame that we get for Rory. Near the end of the very last episode, "Fall," Luke asks Jess if he's over Rory and his words say "yes," but his brooding eyes/body language/aching bad-boy-with-a-heart-of-gold soul all say "no, definitely not." He looks at her through a window like, "ah, someday maybe I'll be with the love of my life."

Because, sure, why not? Pining silently for years when the object of his affection was right there and available worked out for Luke.

tl;dr: Rory is technically single at the end of A Year in the Life, but Logan and Jess are both clearly still hung up on her. Dean, however, is happily married in Scranton and well on his way to having enough kids for a basketball team, so at least one person was able to find happiness after the great Rory Gilmore.

Kayleigh Roberts Kayleigh Roberts is the weekend editor at Marie Claire, covering celebrity and entertainment news, from actual royals like Kate Middleton and Meghan Markle to Hollywood royalty, like Katie Holmes and Chrissy Teigen.
This content is created and maintained by a third party, and imported onto this page to help users provide their email addresses. You may be able to find more information about this and similar content at piano.io
Advertisement - Continue Reading Below
More From Celebrity
What Happens on Katie's Season?
Jennifer Lopez Wears Old Bracelet From Ben Affleck
Advertisement - Continue Reading Below
Simone Biles Cheers on MyKayla Skinner
See the Royals Socialize at a 1991 Cocktail Party
Eugenie's Pics from Inside Harry and Meghan's Home
Queen Trolled Tourists Who Didn't Recognize Her
Blake and Ryan Recreated Their First Date on IG
Charles Expertly Ignored Boris Johnson's Snafu
How Kitty Spencer's Wedding Dress Honored Diana
Dolly Parton On the #FreeBritney Movement