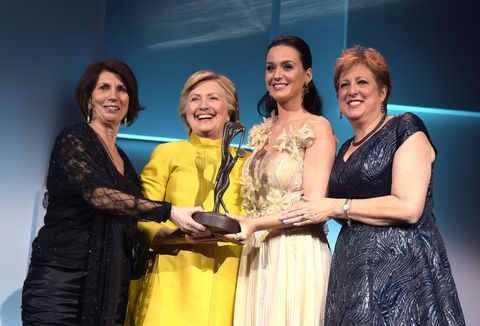 Katy Perry was one of the most fervent and vocal supporters of Hillary Clinton's presidential campaign: she sang "Rise" at the Democratic National Convention, she wore #ImWithHer swag like it was her job, and she even dressed as her idol for Halloween.

So it just makes sense that Clinton herself—who's basically been straight-chilling since the election—would make a surprise appearance to honor Perry at the UNICEF ball.

"[Katy] has the spirit and the energy and the compassion that Audrey Hepburn brought to her work for UNICEF," the former secretary of state said after being greeted with a standing ovation. "Someone whose powerful voice and creative lyrics remind us when you get knocked down to get back up...She has been a goodwill ambassador for UNICEF since 2013, she has traveled the world advocating for the rights and needs of children, she has visited some of the poorest places on Earth, and lent her voice to kids who would otherwise be voiceless from remote villages to Vietnam and Madagascar. She has put a spotlight on child poverty and encouraged the empowerment of women and girls."

This. Just all of this. Cheers to powerful women who use their platforms to make change. 🍸

Mehera Bonner Contributor Mehera Bonner is a news writer who focuses on celebrities and royals—follow her on Instagram.
This content is created and maintained by a third party, and imported onto this page to help users provide their email addresses. You may be able to find more information about this and similar content at piano.io
Advertisement - Continue Reading Below
More From Celebrity
Harry & Meghan's Drama Won't Be on 'The Crown'
Will's Talk with Charles That Led Him to Kate
Advertisement - Continue Reading Below
The Queen Saved Will from a Breakdown as a Teen
Blake Can't Believe She's Still Married to Ryan
Hilary Duff Reveals Her Pregnancy on Instagram
Prince Philip Has "Walked Away" From Prince Harry
Jessica Mulroney Slams Fake Friends on Instagram
Serena Posted Olympia's First Tennis Lesson on IG
Camila Cabello's Hair Has *Never* Been This Short
Diana's Note About Her BBC Interview Is Missing