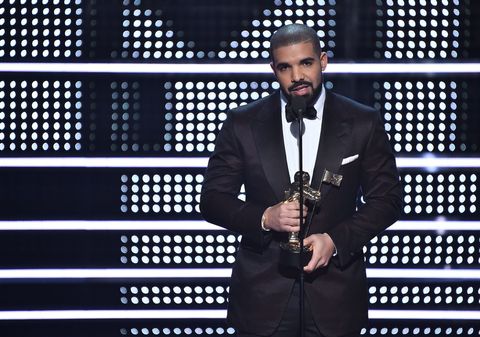 Spotify has just revealed the most-streamed artists, albums, and songs of 2016, and once again, Drake has emerged on top.

Thrilled for Drake and all, but if you're ¯\_(ツ)_/¯ about the news, there's this little tidbit: Spotify is missing some hugely popular songs, albums, and artists due to the rather dramatic war between music streaming services. ICYMI, Lemonade by Beyoncé is only on Tidal, and 1989 by Taylor Swift is only on Apple Music.

Check out more of Spotify's rankings below:

Maggie Maloney Associate Digital Editor Maggie Maloney is the associate editor at Town & Country and ELLE Decor, where she covers style, beauty, jewelry, and the many members of the royal family.
This content is created and maintained by a third party, and imported onto this page to help users provide their email addresses. You may be able to find more information about this and similar content at piano.io
Advertisement - Continue Reading Below
More From Celebrity
What Happens on Katie's Season?
Jennifer Lopez Wears Old Bracelet From Ben Affleck
Advertisement - Continue Reading Below
Simone Biles Cheers on MyKayla Skinner
See the Royals Socialize at a 1991 Cocktail Party
Eugenie's Pics from Inside Harry and Meghan's Home
Queen Trolled Tourists Who Didn't Recognize Her
Blake and Ryan Recreated Their First Date on IG
Charles Expertly Ignored Boris Johnson's Snafu
How Kitty Spencer's Wedding Dress Honored Diana
Dolly Parton On the #FreeBritney Movement