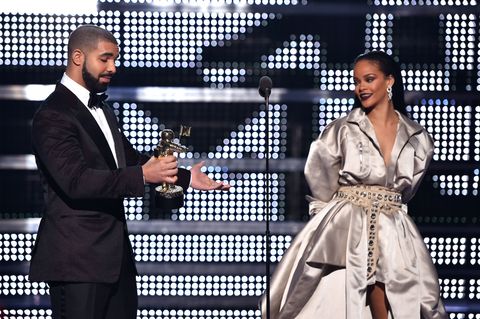 Is it too early for wine? Because Rihanna and Drake have low-key broken up, and everyone is experiencing a lot of feelings. Multiple outlets confirm that the couple recently parted ways—though it appears the split was amicable. "She doesn't want to be held down," sources tells Us Weekly. "They will always be close. If they end up together, it could happen, but not now."

Meanwhile, People reports that Rihanna and Drake are still seeing each other, but "it's an open thing."

"They are not exclusive anymore," yet another source tells E! (literally, so many sources, so little time). "They still love each other, but their schedules have gotten in the way. Anything can change between them though, for better or worse. They are still in each other's lives."

Drake was recently spotted kissing and being "very couple-y" with model India Love at a Toronto Blue Jays baseball game—however, it's only been a couple months since he took it to the VMA stage and declared his love for Riri. "She's someone I've been in love with since I was 22 years old," Drake cooed at the time. "She's one of my best friends in the world. She's a living breathing legend in our industry."

BTW, the couple got matching tattoos of a stuffed shark this summer, and frankly if that isn't true love, we don't know what is.