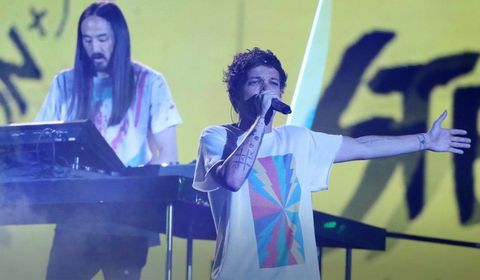 Louis Tomlinson returned to the X Factor stage, where One Direction's journey began, on Saturday to give what is probably the most emotional performance of his career. He debuted his new single, "Just Hold On," just three days after his mother, Johanna Poulston, lost her battle with leukemia.

Tomlinson received a standing ovation for the performance, as well as high praise from his X Factor friend and mentor, Simon Cowell, Entertainment Weekly reports.

"I've known you now for six years. What you've just done and the bravery—I respect you as an artist, I respect you as a person, and your mom was so proud of you, Louis," Cowell said. "She was so looking forward to tonight. She's watching down on you now and you've done her proud."

Tomlinson tweeted after the performance to thank his fans and, of course, his mom.

That was harder than I ever imagined. I want to thank everyone around me and all of the amazing fans out there that made that so special!

Feeling so much love around me and my family . Mum would have been so fucking proud ( sorry for swearing mum 😝 ) love you !