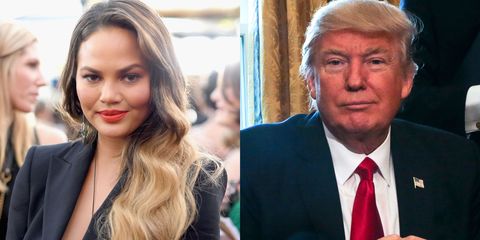 Chrissy Teigen is the true face of the celebrity Twitter #resistance against Donald Trump, but turns out she was trolling him way before all the other cool kids were doing it. The supermodel has been throwing shade at Trump since 2011, and she said as much during an interview.

"I've actually been a big Donald Trump hater for a long time. If you go back, I've been trolling him for about five to seven years now," Teigen told USA Today. "I've been doing this forever and I take pride in that. If you go back to my old ones [tweets] I was like: 'You're the fucking worst' many years ago. I can't believe somebody could actually do this all day, every day, and still be president. It's insane. I think he's the fucking most vile person on this planet and if I mysteriously go missing in the next four years then that's what happened."

Cool, let's start at the beginning, shall we?

The rest, as they say, is history.