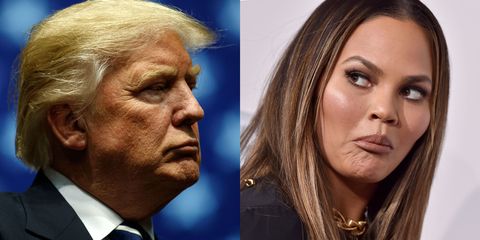 Future president Donald Trump is having a pretty tough time getting anyone to perform at his inauguration, and now it looks like he's riding that damage control train. Inaugurations are typically celeb-packed events, but considering Hollywood was overwhelmingly #WithHer, Donald Trump's celeb pickings are a little slim. Hence this rather sad tweet:

The so-called "A" list celebrities are all wanting tixs to the inauguration, but look what they did for Hillary, NOTHING. I want the PEOPLE!

Ummm, okay. We get that Trump is trying to give off "Man of the People" vibes, but—as Chrissy Teigen flawlessly points out—celebrities are people.

Hi - we are people. You are our president too. I don't want you to be, but u are. Also we ALL know you are dying without the approval, dear https://t.co/NaVU1iDban

But have fun with DJ Buttcrack spinning the hot shit and Lil Banana dropping bars at your inauguration https://t.co/NaVU1iDban

It'll be interesting to see who actually shows up for Trump, but praying DJ Buttcrack will make an appearance.