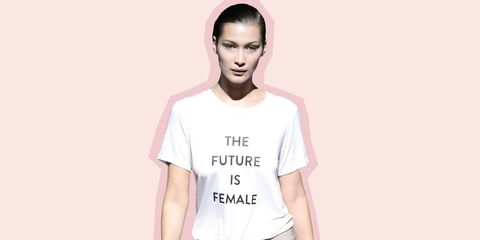 Bella Hadid was crying. The model had just changed into her off-duty outfit after walking in Prabal Gurung's New York Fashion Week show (calf-length cut-off jeans and a pink satin jacket, for the record) and there were still tears in her eyes. And no, they weren't from her breakup with The Weeknd.

The epic finale of Gurung's show—eliciting unprecedented cheers and wild applause—featured a diverse array of models walking to a female cover of "Imagine," and Bella was part of the pack. The model wore a shirt with The Future Is Female written on it, as her fellow models walked in tees emblazoned with slogans like My Girlfriend Is a Feminist, Revolution Has No Borders, I'm a Migrant, and She Persisted.

"This whole show was about women's empowerment, self-love, and powerful, strong women," Hadid told MarieClaire.com. "Prabal doesn't tell us how to walk. He says, 'Be yourself. Be the way you want to be. Be happy. Be strong.' Every single girl here is so strong and beautiful in her own way. I was crying during the finale. Right now, the way the world is, it's a beautiful message to pass along."

Prabal's shirts featured an array of political slogans, but Hadid's was pretty clearly about the power of women—a subject she doesn't shy away from. "Women are standing up for what we want and really going for it," she said. "It's a great message and it's not negative—it's definitely coming from a very positive place. There's every reason for people to be talking about it."

"RIGHT NOW, THE WAY THE WORLD IS, IT'S A BEAUTIFUL MESSAGE TO PASS ALONG."

So what's Hadid herself "really going for?" At the moment she's "not sure," but between walking in this show and marching in protests, we're psyched about however she'll use her platform next. 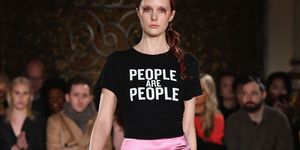 All the Political Statements on the NYFW Runways

This content is created and maintained by a third party, and imported onto this page to help users provide their email addresses. You may be able to find more information about this and similar content at piano.io
Advertisement - Continue Reading Below
More From Celebrity
Gabrielle Union Debuted a New, Short Haircut
J.Lo Made Out With Ben on IG for Her 52nd Birthday
Advertisement - Continue Reading Below
Are Will & Kate Sending a Message to Harry & Meg?
Harry and Meghan Reportedly Have a Four-Book Deal
Naomi Osaka Lit the Olympic Cauldron in Tokyo
John Legend Performed "Imagine" for the Olympics
Simone Biles Is Honored With Her Own GOAT Emoji
Kate Winslet Reveals Her Favorite Red Carpet Look
Margot Robbie Had a Life-Size Cutout of John Cena
Jennifer Lopez and Ben Affleck Are IG Official