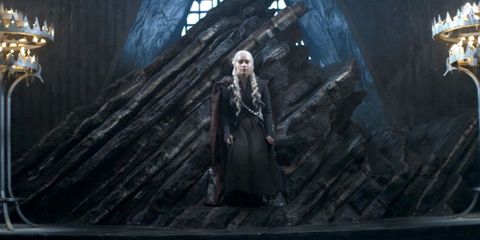 Game of Thrones Season 7 won't premiere until July, but HBO is *finally* releasing some teasers of what to expect. In the latest video, released Thursday, Cersei Lannister, Jon Snow, and Daenerys Targaryen all take long walks to their respective thrones (except Jon, who prefers to stand, apparently).

While the rest of us were distracted by the haunting blue eye of the Night King, the genius humans over at Wired immediately turned to something else very worthy of analysis: The costumes on our three Iron Throne contenders. Let's break it down:

Jon is wearing pretty much what we've always seen him wear—lots and lots of warm layers for furs and cloaks. As Wired notes, the main addition to Jon's ensemble is the fancy gold clasp on his cloak, which you can see gleaming in the light as he marches on. What does this say for Jon next season? A few things, potentially.

First, the fact that he's still dressed in more or less the same outfit as he's been wearing since his days on The Wall might signal that he's not changing much as he takes on more and more power. He's still going to be the same, mopey, stalwart Jon we've known for so long.

But that gold clasp, that seems like a signal that he's embracing his new title as King of the North, even if it's begrudgingly. Sansa isn't featured in the teaser, but this could mean some tension between them, as she is the oldest official Stark and a badass in her own right—and she and Jon have butted heads about strategy in the past.

Cersei is currently sitting on the Iron Throne and she's dressing the part. Wired suggests that her current preference for all-black attire probably has something to do with all of the mourning she's doing (for Tommen, for Myrcella, and still, of course, for Joffrey and Tywin), but more than that it seems to be her power color.

Sure, the Lannisters are associated with red and Cersei wore plenty of that color in the early years of the show, but since she ascended to the throne, she's been channeling her late father, Tywin Lannister's, black, leather, ready-for-battle-at-all-times fashion sense.

What this seems to say about Cersei is that she's ready to fight for her throne (duh). She's been through so much (wildfire) to get to where she is now and she's not going to back down.

Dany's outfit might be the most interesting and telling of all. We've seen her fashion sense change a lot over the years as she's traveled, first wearing Dothraki blue and then, during her time in Slaver's Bay, white, which, as costume designer Michele Clapton explained to BuzzFeed, was Dany's way of visually removing herself from a situation she didn't agree with.

Now, in the new teaser, she's wearing black and burgundy, which, as Wired notes, is significant since she hasn't worn red since she was with her late brother Viserys, who was actively seeking an army to take back the Iron Throne. In addition to that, however, black and red are the colors of Drogon, her main and most ferocious dragon, so it's only fitting that she would channel him as she returns to take back her throne.

Kayleigh Roberts Kayleigh Roberts is the weekend editor at Marie Claire, covering celebrity and entertainment news, from actual royals like Kate Middleton and Meghan Markle to Hollywood royalty, like Katie Holmes and Chrissy Teigen.
This content is created and maintained by a third party, and imported onto this page to help users provide their email addresses. You may be able to find more information about this and similar content at piano.io
Advertisement - Continue Reading Below
More From Celebrity
Chloe From 'Too Hot to Handle' Is in 'The Circle'
Comparing the Two Biggest Royal Weddings
Advertisement - Continue Reading Below
Kate, George, and Charlotte Were Seen Shopping
J.Lo Shares First IG Photo Post A-Rod Split
Harry Has Experienced "Frostiness" from Royals
Billie Eilish Just Debuted a Bouncy Blonde Blowout
Gigi Shared an Adorable Spring Selfie With Khai
Katie Holmes Posted a 15th Bday Tribute to Suri
Chrissy Teigen Talked Stigma Around Infertility
Beyoncé Stuns in a Mesh Dress With Matching Gloves