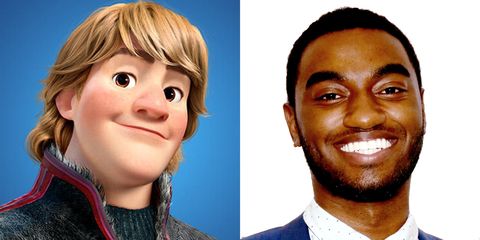 Disney just announced the cast of Frozen on Broadway, and the role of Kristoff is being played by newcomer Jelani Alladin, AKA this enthusiastic fella:

Like many Disney films, Frozen is just about the whitest movie on the planet—which makes the decision to cast a black actor as Kristoff all the more noteworthy.

This is an inarguably progressive moment for Disney, and comes after their much-publicized decision to re-write Beauty and the Beast's Le Fou as gay. It's frankly wonderful to see more diversity from a brand whose history is rooted in racism (pro tip: don't casually Google old Disney animations and expect not to cringe)—though we're sure this decision will be met with some backlash from the more conservative (read: racist) corners of the internet. Let's not forget how intensely disappointing some people's reactions were when Harry Pottter and the Cursed Child cast black actress Noma Dumezweni in the role of Hermione.

That said, congratulations to Disney for embracing diversity on Broadway...now if only they'd do it more in their actual animated films...