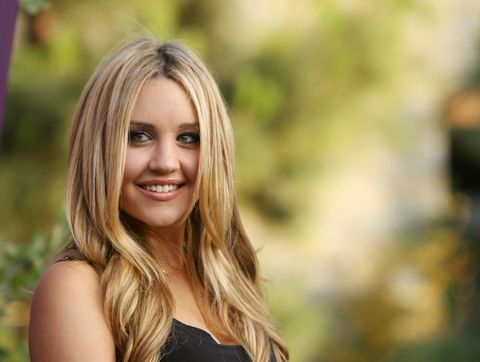 Earlier this year, Amanda Bynes made a brief return to social media to shut down a few false rumors. But now she's back in earnest, giving her first television interviews in years to Diana Madison of The Lowdown.

"I'm doing really great," Bynes smiled, explaining that she's recently been busy attending fashion school. "I love it—I've learned how to sew, I make patterns, and I want to start a clothing line in the future." But for fans still hoping to see make an on-screen comeback, there's hope—Bynes revealed she's hoping to start acting again in television. "Maybe a few guest spots on shows that I'm a fan of, maybe another TV show where I'm the star of it in the future."

Though Bynes didn't directly address her struggles over the past few years (she was forcibly hospitalized in 2013 and spent several months in inpatient care), she's focusing on self-care and charitable work. "I hike, I go spinning, I feed the homeless and that's been really interesting and fun." Asked about Nick Cannon's touching open letter in which he called her "family," Bynes said "I really appreciate that. We never talked, I know that he called me family and I love that, he's definitely a family member to me too."

And naturally, that infamous Drake tweet came up. "I actually wasn't being insincere!" Bynes laughed. "I was like, saying, 'murder my vagina'. I was serious, but I was also on drugs. That was my way of saying like 'let's do it, man!' I was on drugs and trying to be hilarious. He's hot!" But... but what does it mean to have your vagina murdered? "It just means, like, 'f**k me Drake!'"

Madison also asked Bynes whether Blac Chyna stole her look, which...is a weird question that Bynes was quick to correct. "I stole her look! I was getting the microdermals in my cheeks because she had them, I thought they looked super hot on her…. I'm a fan of hers."

Emma Dibdin Emma Dibdin is a freelance writer based in Los Angeles who writes about culture, mental health, and true crime.
This content is created and maintained by a third party, and imported onto this page to help users provide their email addresses. You may be able to find more information about this and similar content at piano.io
Advertisement - Continue Reading Below
More From Celebrity
Spice Girls Reunion Tour Might Feature Posh Spice
Prince Charles' Revealing Joke About the Throne
Advertisement - Continue Reading Below
Some People Think Prince Harry Sounds American Now
Prince Charles May Make Buckingham Palace a Museum
Chrissy's Daughter Luna Is Learning to Read
The Queen Spent a Night in Hospital
Kate and Will Made Emma Watson Crack Up
Blake Lively Called Out an Instagram Account
Khloé and Tristan Have "No Label" Right Now
Kate and Will Share Intimate Moments in New Photos