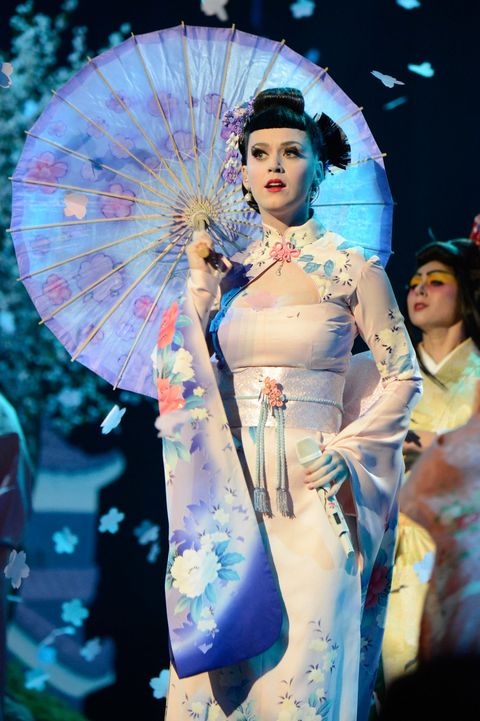 Katy Perry raised some eyebrows when she dressed up as a geisha during the 2013 American Music Awards, and raised even more eyebrows thanks to the way she wore her hair in the "This Is How We Do" video. And now, the pop star is owning up.

In an interview with Pod Save the People's DeRay Mckesson, Perry said she's "made several mistakes" and has had some hard conversations with friends about them.

"I listened, and I heard, and I didn't know," Perry said. "And I won't ever understand some of those things because of who I am. I will never understand, but I can educate myself, and that's what I'm trying to do along the way...Even in my intention to appreciate Japanese culture, I did it wrong with a performance. And I didn't know that I did it wrong until I heard people saying I did it wrong. And, sometimes that's what it takes—is it takes someone to say, out of compassion and out of love, 'Hey, this is where the origin is...do you understand?' And not just a clap-back, because it's hard to hear those clap-backs sometimes, and your ego wants to turn from them."

While it's good that Perry is learning, it should be noted that some are understandably less than impressed.

Mehera Bonner Contributor Mehera Bonner is a news writer who focuses on celebrities and royals.
This content is created and maintained by a third party, and imported onto this page to help users provide their email addresses. You may be able to find more information about this and similar content at piano.io
Advertisement - Continue Reading Below
More From Celebrity
What Happens on Katie's Season?
Gigi Shared the Sweetest Photo of Zayn and Khai
Advertisement - Continue Reading Below
Meghan Shared the Cutest Update About Archie
Meghan's Heartfelt Father's Day Gift for Harry
Sophie Turner Shared a Sweet Unseen Pregnancy Snap
The Queen Has a Collection of Dog Toys for Sale
Meghan Revealed the Nod to Diana in 'The Bench'
Celebs Are Posting Tons of Father's Day Tributes
Will Spent Father's Day with George and Charlotte
Charles Won't Allow Archie to Become a Prince