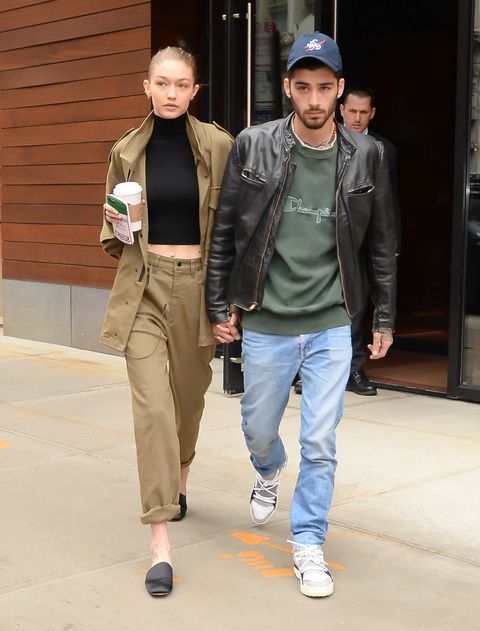 Look up "power couple" in the dictionary, and you'll probably come across a photo of Zayn Malik and Gigi Hadid. But the One Direction star isn't particularly comfortable with that label because—turns out—he and Hadid are pretty normal behind closed doors.

"I can understand how it can look, that you've got these two people in a 'power couple,'" Zayn said during a recent interview with the Evening Standard. "That's not something I want to be a part of. I'm with her because I like her and I hope she's with me because she likes me. When we come home, we don't really talk about that shit. We just spend time together as a normal couple, cook food, watch TV, have a laugh. I've got into a thing of cooking pies recently. I cook a mean chicken and sweetcorn pie, with Alfredo sauce. I make my own pastry, roll it out and everything."

"I'm with her because I like her and I hope she's with me because she likes me."

That said, privacy is an issue in their relationship—especially in New York City (where Hadid lives). "In New York, you can sometimes get out in the early hours of the morning for a walk," he says. "But there's no underground parking here, no escape routes. So they're going to get pictures, they're going to find you. In LA, it's more catered to these things—you've got back entrances and that."

The newly minted solo artist also spoke at length about his Muslim upbringing, saying he was "raised in the Islamic faith, so it will always be with me," but that he doesn't "want to be defined by my religion or my cultural background." He even recounted an experience with racial profiling back in his 1D days:

"The first time I came to America, I had three security checks before I got on the plane; first they said that I'd been randomly selected, and then they said it was something to do with my name, it was flagging something on their system...Then when I landed, it was like a movie. They kept me there for three hours, questioning me about all kinds of crazy stuff. I was 17, my first time in America, jet-lagged off the plane, confused. The same thing happened the next time too."

Mehera Bonner Contributor Mehera Bonner is a news writer who focuses on celebrities and royals—follow her on Instagram.
This content is created and maintained by a third party, and imported onto this page to help users provide their email addresses. You may be able to find more information about this and similar content at piano.io
Advertisement - Continue Reading Below
More From Celebrity
Zaya Wade Freaked Out Chatting With Michelle Obama
Harry & William Won't See Eye-to-Eye Any Time Soon
Advertisement - Continue Reading Below
Jennifer Lopez Stuns in a Little Black Mini Dress
Harry & Meghan Won't Throw the Queen Under the Bus
Harry & Meghan Have Nothing to Lose in Oprah Chat
How to Watch Meghan and Harry's Oprah Interview
Gigi Hadid Dyed Her Hair Red
How Celebrities and Friends Are Supporting Meghan
Meghan Didn't Need Prince Harry to Be Wealthy
Pregnant Emma Stone Runs Errands in Santa Monica