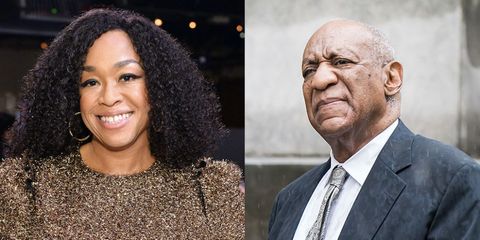 When it comes to television, Shonda Rhimes is responsible for some of the most successful shows of the past decade. But despite previously being a successful sitcom star, Rhimes has zero time for Bill Cosby following the sexual assault trial brought against him, which was recently given a mistrial verdict. And when it comes to Cosby's plans to teach seminars on the subject of avoiding sexual assault, Rhimes is most definitely NOT here for it.

As Rhimes posted on Twitter, "From Shonda's Town Hall on Avoiding Sexual Assault Charges: 1)Do not sexually assault anyone. 2)Shut up-this attention belongs to survivors."

From Shonda's Town Hall on Avoiding Sexual Assault Charges: 1)Do not sexually assault anyone. 2)Shut up-this attention belongs to survivors.

The creator of Grey's Anatomy makes two succinct, yet pertinent, points. First of all, more than fifty women have accused Cosby of sexual assault to date. Secondly, the voices of these women need to be heard, particularly as it's not possible to try most of the cases, as they are outside of the statute of limitations. Rhimes' response is perfect, and sums up exactly why Bill Cosby shouldn't be organising Town Hall meetings.

They said, "People need to be educated—a brush against the shoulder, anything at this point can be considered sexual assault. It's a good thing to be educated about the law."

Luckily, Rhimes will continue to speak her mind on the subject, and like most of us, won't stand for Cosby's offensive new plans.

Amy Mackelden Amy Mackelden is a freelance writer, editor, and disability activist.
This content is created and maintained by a third party, and imported onto this page to help users provide their email addresses. You may be able to find more information about this and similar content at piano.io
Advertisement - Continue Reading Below
More From Celebrity
Khloé and Tristan Have "No Label" Right Now
Kate and Will Share Intimate Moments in New Photos
Advertisement - Continue Reading Below
Scott Disick Avoids Travis Barker, Apparently
Adele's Latest Date Look Was a Leather Suit
Alicia Silverstone Got Banned From a Dating App
The Queen Just "Reluctantly" Canceled a Trip
Adele's Album Will Feature a Sensitive Voicemail
Selena Gomez Just Debuted a Sleek Bob
Zendaya Looked Incredible at the 'Dune' Premiere
Kate Middleton Is Helping Tackle Addiction