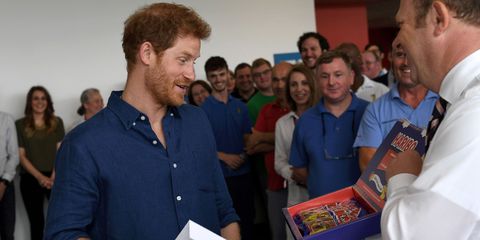 Prince Harry's royal duties keep him pretty busy, but that didn't stop him from visiting a Haribo factory on Friday. Staff at the factory looked overjoyed to have the prince in their midst, especially when he donned a white lab coat and hat to handle the candy.

Harry visited the new factory in Castleford to meet with staff, as part of his tour of West Yorkshire in the north of England.

And to thank him for visiting, Prince Harry was presented with a "Harry Mix" box, containing bags of candy shaped like the prince. While these aren't currently available to the general public, it feels as though there could be a major market for them.

When asked why he created the "Harry Mix", Managing Director of the Haribo factory, Herwig Vennekens, told The Telegraph, "It's such a unique thing we could do to thank him for coming and spending time with employees. It was really worth the effort. He brought so many smiles to the faces of the staff."

As part of his tour of the north of England, Prince Harry also visited several charities, and continued his work promoting mental health awareness. The royal definitely deserved his "Harry Mix" candy, and it's safe to say millions of people around the world would like some of the coveted Haribo too.

Prince Harry has spent two days in Leeds to support the work of a number of local organisations and charities → https://t.co/1TlI8vLl7x pic.twitter.com/UHvceNIrQa

Amy Mackelden Amy Mackelden is a freelance writer, editor, and disability activist.
This content is created and maintained by a third party, and imported onto this page to help users provide their email addresses. You may be able to find more information about this and similar content at piano.io
Advertisement - Continue Reading Below
More From Celebrity
Ariana Grande Got Married Over the Weekend
Ariana Grande Quietly Married Dalton Gomez
Advertisement - Continue Reading Below
Joie de Tracee
Jennifer Lopez and Ben Affleck: Everything We Know
Harry & Oprah's Mental Health Doc Has a Title
Serena Williams Might Miss the Tokyo Olympics
Jennifer and Ben Have "Unreal" Chemistry Together
The Sussexes Marked Archie's Bday in a Lovely Way
Queen's Cousin Accused of Selling Access to Putin
Meghan Wore a Meaningful Necklace for Vax Live