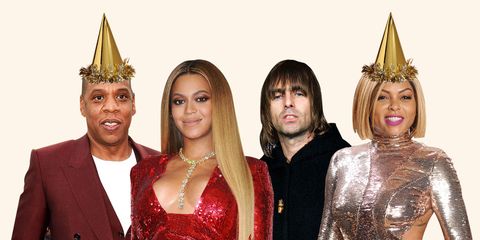 This week in petty...petty theft, Pete Doherty, and subliminal messages sent via lawnmower. Welcome to the Petty Party, which is like a newsletter of small-minded events (mostly) related to famous people.

When Taraji P. Henson Decimated an Instagram Commenter (He Started It)

When Liam Gallagher Recounted the Time He Met Pete Doherty

Nobody gives a sound bite quite like Liam Gallagher—unless it's Liam Gallagher with new music to promote. In an interview with NME, the solo artist recalled meeting Kate Moss' ex Pete Doherty with his usual color and command of language. "No, I've only met him once, but that was years ago ...It was just 'Hello, you're really tall and that.' He looked like my mic stand." How we'd all like to be remembered.

When the Internet Realized What *Really* Went Down in That Met Elevator Between Beyoncé, Jay-Z, and Solange

And that night, three excellent records were born.

And Since It Was Otherwise a Well-Behaved Week in Celeb World...This Is Why We Can't Have Nice Things

Naively believing that people would do the right thing (HAHAHA), a Chinese startup lost 300,000 umbrellas in just three months. (The concept: Citi Bike but for rain shades. And without the penalty for failing to return the product, which explains the rampant theft.) Despite losing nearly all his stock, the founder will soldier on, rolling out 30 million umbrellas across China by the end of the year, the Guardian reports. I dreamed a dream, etc.

Or at least Google Maps. In a checkmate move, a vindictive person with a lawnmower and some time on his or her hands shaved "AHOLE" with an arrow pointing to his neighbor's house, which, according to Reddit, had been renovated with a bright purple garage structure in 2009. (Other residents then petitioned the county for property tax relief, claiming the eyesore devalued their homes.) At least when the aliens do it, they make nice circles—which just goes to show humans will probably lose an intergalactic war, but at least we'll go out making some dank memes and getting in one final shot at our fellow man.

Chelsea Peng I'm Chelsea Peng, the assistant editor at MarieClaire.com.
This content is created and maintained by a third party, and imported onto this page to help users provide their email addresses. You may be able to find more information about this and similar content at piano.io
Advertisement - Continue Reading Below
More From Celebrity
Meghan Markle Looked Gorgeous at Global Citizen
Harry and Meghan Are Taping Their NYC Trip
Advertisement - Continue Reading Below
Keep an Eye on Lady Louise Windsor
Princess Beatrice's Daughter May Get a Royal Title
James Middleton’s Wife Thought He Was a Waiter
Meghan Markle Got a New Nickname
Harry Said the Queen and Philip Were "Adorable"
Kate Middleton Played Tennis With Emma Raducanu
Tom Felton Collapsed on a Golf Course
Ashley Olsen Made a Rare Red Carpet Appearance