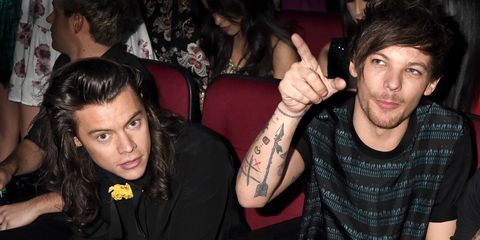 In the internet's rich history of fan fiction, one story takes the cake: the theory that Harry Styles and Louis Tomlinson are secretly dating. Or, in layman's terms: the Larry Stylinson theory. Larries, as proponents of this theory call themselves, are very...um...active...in the 1D fan community—and they've gone so far as to claim Tomlinson's baby is fake, that he and Styles are secretly married, and that their tattoos are matching.

It's a lot. And Louis Tomlinson is finally speaking out about it after literal YEARS.

"I've never actually been asked about it directly," he said during a recent interview. "It's a funny thing. It kind of happened naturally for me and Harry because a certain amount of the fans drew up this conspiracy. When it first came around I was with Eleanor, and it actually felt a little bit disrespectful to Eleanor, who is my girlfriend now."

Tomlinson also said that the rumors had a negative impact on his relationship with Styles: "I'm so protective over things like that, about the people I love. So it created this atmosphere between the two of us where everyone was looking into everything we did. It took away the vibe you get off anyone. It made everything a little bit more unapproachable. I think [what's happened since] shows that it was never anything 'real' if I can use that word."

He wrapped things up with: "If you Google 'Conspiracy' on iPhones, you're going to get a conspiracy. So it's one of these things that people love to buy into, but in reality obviously there's no truth to it. Obviously."

Mehera Bonner Contributor Mehera Bonner is a news writer who focuses on celebrities and royals.
This content is created and maintained by a third party, and imported onto this page to help users provide their email addresses. You may be able to find more information about this and similar content at piano.io
Advertisement - Continue Reading Below
More From Celebrity
Will & Kate Welcomed Harry Back Into Their Group
Queen Left a Handwritten Note on Philip's Coffin
Advertisement - Continue Reading Below
The Queen Said Grief Is the Price We Pay for Love
All of the Photos from Prince Philip's Funeral
The Queen Wore This Brooch to Philip's Funeral
Kate Middleton's Nod to Diana at Philip's Funeral
Queen Elizabeth Appears at Prince Philip's Funeral
Harry Back With Will & Kate at Philip's Funeral
How Prince Harry and Meghan Honored Philip Today
40 Celeb Exes Who Worked Together After a Breakup