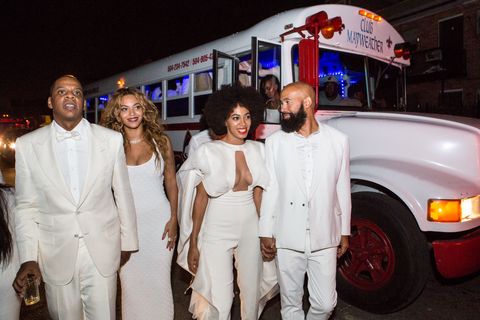 Jay Z recently dropped a new album called 4:44, which is essentially a response to Lemonade in which he details the time he cheated on Beyoncé. But about that title. Guys, about that title.

Thanks to an unsung hero on Twitter, the internet currently thinks 4:44 is a direct reference to Jay Z's notorious elevator fight with Solange—which took place as they were leaving a party. You know, this ol' chestnut:

Why? Becuase the building where the fight took place is number 444.

Naturally, people are very much here for this revelation, but Jay Z technically already explained why he named the album 4:44:

"I woke up, literally, at 4:44 in the morning, 4:44 am, to write this song," he said of the title track. "So it became the title of the album and everything. It's the title track because it's such a powerful song, and I just believe one of the best songs I've ever written."

Hmmm, okay, but WHAT IS THE TRUTH?

Mehera Bonner Contributor Mehera Bonner is a news writer who focuses on celebrities and royals—follow her on Instagram.
This content is created and maintained by a third party, and imported onto this page to help users provide their email addresses. You may be able to find more information about this and similar content at piano.io
Advertisement - Continue Reading Below
More From Celebrity
The Royals Refused to Fact Check 'The Crown'
Charles' Friend Says 'The Crown' Is Propaganda
Advertisement - Continue Reading Below
Peacock Apologizes for Selena Gomez Kidney Joke
Jessica Mulroney Says Meghan FaceTimes Her A Lot
Kate Might Be Wearing This Gucci Blouse Backwards
Gigi Hadid Kisses Her Baby Girl's Head in New Pic
Kate Middleton Wears an Oversized Barbour Jacket
J.Lo's New Song "In the Morning" Is Sexy AF
The Queen Has Launched Her Own Gin
How Celebs Are Celebrating Thanksgiving This Year