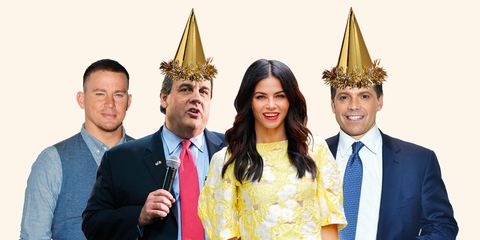 This week in petty...out of the mouths of babes comes savagery, the Mooch rides off into the sunset, and Chris Christie displays maternal instinct as it applies to cheese-coated tortilla chips. Welcome to the Petty Party, the best part of the week, mostly in that this series always goes up on Fridays.

At #Cubs #Brewers game. #ChrisChristie was getting razzed by fans, so he got in the face of one of them. 5:30 on @WISN12News pic.twitter.com/sx8euMgFy2

Most people, when confronting a heckler, would be like, "Hold my earrings, and my beer, and take my nachos too." But not Chris Christie—no, he brings his concessions into battle with him. After a spectator had a go at him, the governor invaded his personal space without once losing his grip on his snack. How do you think he got to achieve such grace? A Princess Diaries-type training regimen but instead of balancing a book on his head, he just tucks a paper boat into his chest with the sort of reverence an archaeologist would apply to the handling of ancient manuscripts? P.S. Christie has since given a comment on his "restrained" response. "I didn't dump the nachos on him or anything, which I think was an option."

It was never an option.

When the Mooch Was Like "Whatever" to His Entire Life, Personal and Professional, Falling Apart

In a real-life Greek tragedy Sophocles, wherever he is, would die to adapt for the stage, Anthony Scaramucci lost his job and his family, all in a matter of days. But instead of embarking on a suicide mission to bury his disgraced brother or being sealed in a cave, when asked directly about the collapse of his marriage, Scaramucci simply went, "It's fine. I mean, what am I going to do?" Easy. Breezy. Scaramucci.

When the Internet Danced on the Mooch's Grave

Unfortunately for the Mooch, the minimum tenure to get invited to the annual WH Comms Directors Reunion is 3 weeks

Probably contributing to the above point was the internet's unabashed glee at his firing as White House communications director. (Take your pick from the "longer than"/Battle Royale/speed race memes.) On the one hand, that really sucks, dude. On the other, you can't just say that. On the third hand, one could appreciate the splendid audacity with which he skewered his colleagues, something many have wanted to do but few have been actually stupid/brave enough for. 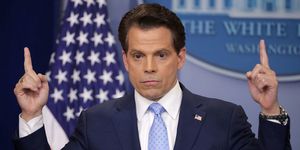 The 13 Best Tweets About Scaramucci\'s Firing

When Channing Tatum and Jenna Dewan's Daughter Pooh-Poohed Their Filmography

Up to a certain age, children cannot be held accountable for what they say, even if it is to denigrate their parents' oeuvre. In an interview with Jimmy Kimmel, Channing Tatum discussed the Roger Ebert-esque review 4-year-old Everly gave to Step Up. "Within 10 seconds, she was like, 'Can I watch a real movie? I don't know, like a good one?'" Tatum said. "Then like 10 more seconds went by and she was like, 'Please can I watch a real movie?' And we're like, 'Fine, just put on Moana.'" May she someday come to recognize Step Up for the cinematic gem it is.

When Mariah Carey Foisted Her "Vocal Remedy" on an Unsuspecting Reporter

Champagne: lovely. Honey: antibacterial, never goes bad, swell. But together? As medicinal drink for the vocal cords, even though alcohol is dehydrating? Is this Mariah's idea of a practical joke?

Chelsea Peng I'm Chelsea Peng, the assistant editor at MarieClaire.com.
This content is created and maintained by a third party, and imported onto this page to help users provide their email addresses. You may be able to find more information about this and similar content at piano.io
Advertisement - Continue Reading Below
More From Celebrity
Marc Anthony Supports J.Lo Amid A-Rod Split
The Palace Just Shared Prince Louis Birthday Pic
Advertisement - Continue Reading Below
Meghan and Harry Talked Every Day During UK Trip
J.Lo Wishes A-Rod's Daughter a Happy Birthday
Irina Shayk Shared a Rare Photo of Her Daughter
John Travolta Talked Dancing With Princess Diana
Meghan Markle and Archie Speak to the Queen
Who Is Alexandria Ocasio-Cortez's Partner?
Did Charles, Harry, and William Mend Relationship?
The Kardashians' Most Body-Confident Nude Shoots