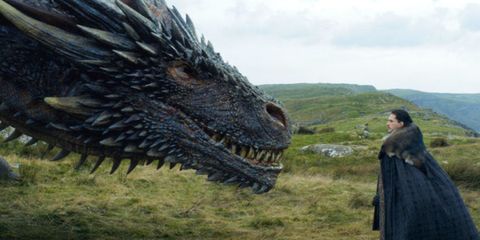 We all know Jon Snow is really a Targaryen, but no one on Game of Thrones knows—except for Bran the Creepy Three-Eyed Raven, that is, and he hasn't found the opportune moment to creepily tell anyone else.

Actually, we take that back. One other character does seem to know that Jon is actually a Targaryen—Daenerys' main dragon, Drogon, who straight-up let Jon pet him this week when they finally met face-to-face.

The moment does more than just serve as evidence that Jon's true lineage will soon be revealed to the other Thrones characters though—it also goes a long way toward legitimizing the long-running fan theory that Tyrion is a Targaryen, too.

Remember, we've seen Dany's dragons respond well to a character other than their mom only one time before. In Season 5, someone had to release her other two dragons, Rhaegal and Viserion, while she was away and that person ended up being Tyrion.

The similarities are just too much to ignore, right?

Kayleigh Roberts Kayleigh Roberts is the weekend editor at Marie Claire, covering celebrity and entertainment news, from actual royals like Kate Middleton and Meghan Markle to Hollywood royalty, like Katie Holmes and Chrissy Teigen.
Advertisement - Continue Reading Below
More From Celebrity
Harry Could Lose Titles If He Becomes a US Citizen
Harry & Meghan Plan a UK Birthday Party for Archie
Advertisement - Continue Reading Below
New Photos Offer a Peek Inside Kensington Palace
Kate & William Discuss Pandemic Mental Health
Tom Hanks Shared an Update About Returning to U.S.
Harry & Meghan Emailed the Queen about Royal Exit
Meghan and Harry Def Want Another Baby
Tom Hanks & Rita Wilson Are Back in Los Angeles
Meghan Is Serious About Her Quarantine Precautions
Angelina's Kids Are Making Most of Quarantine