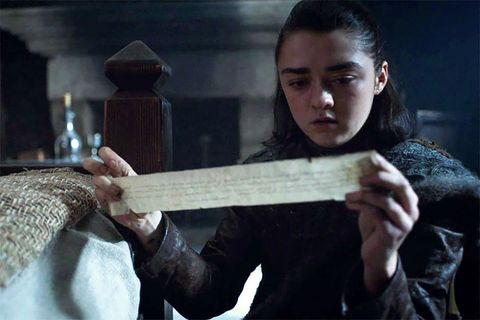 On last week's Game of Thrones, master manipulator Littlefinger finally started to show some true signs of worry, especially after seeing what an amazing fighter Arya has become.

This week, he used her spying skills against her, leading her to follow him and discover something meant to tear her and her sister, Sansa, apart. Arya and Sansa already disagree on how to rule Winterfell, so driving a wedge between them wouldn't be the hardest thing to do.

Littlefinger made sure Arya saw him being shady, hiding a copy of a raven Maester Luwin had kept. When Arya sneaks into Littlefinger's room, she finds the note—exactly like he wanted her to.

If the note looks familiar, it's because we've seen it before—Sansa wrote it in Season 1, to her older brother Robb. It says:

Robb, I write to you with a heavy heart. Our good king Robert is dead, killed from wounds he took in a boar hunt. Father has been charged with treason. He conspired with Robert's brothers against my beloved Joffrey and tried to steal his throne. The Lannisters are treating me very well and provide me with every comfort. I beg you: come to King's Landing, swear fealty to King Joffrey and prevent any strife between the great houses of Lannister and Stark.

Sansa was pressured by Cersei to write the letter, but Arya doesn't know that. Hopefully she'll figure it out though, considering Robb and Maester Luwin did pretty much immediately.

On the Inside the Episode recap, showrunner D.B. Weiss addressed the moment:

Arya is very used to being more clever and more stealthy, and smarter than any of the people she's up against, but she hasn't dealt with Littlefinger for a while. She gets roped into spying on somebody who's actually leading her by the nose to something that he wants her to have. He's looking for a way to prevent this sister bond from developing further because the tighter they are the more definitively he is caught on the outside of it. On the Sansa end of the relationship he's seen the opening and now all he needs to do is give Arya a cause to display real rage towards Sansa. And, he knows full well that with what's going on in Sansa's head with regards to Arya and how dangerous she is, when Arya starts to act dangerous, and act angry, he knows where Sansa is going to turn.

Kayleigh Roberts Kayleigh Roberts is the weekend editor at Marie Claire, covering celebrity and entertainment news, from actual royals like Kate Middleton and Meghan Markle to Hollywood royalty, like Katie Holmes and Chrissy Teigen.
This content is created and maintained by a third party, and imported onto this page to help users provide their email addresses. You may be able to find more information about this and similar content at piano.io
Advertisement - Continue Reading Below
More From Celebrity
Meghan Markle Expresses Sympathies to the Queen
Prince Harry Remembers Prince Philip
Advertisement - Continue Reading Below
Prince William Statement on Prince Philip's Death
Meghan and Harry Are Facing Security Threats
Selena Gomez Is Drenched in Fake Blood on Set
Amanda Seyfried Talked About Having Panic Attacks
Harry Arrives in the U.K. For Philip's Funeral
Matthew Perry Deletes 'Friends' Reunion Instagram
The Queen's Corgis Are Helping Her With Her Grief
Charles is Looking Forward to Seeing Harry Again