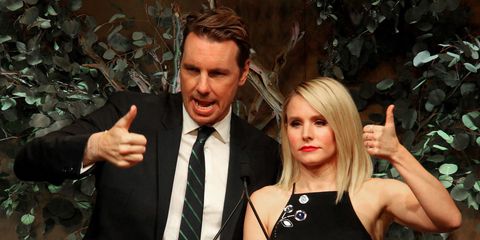 Kristen Bell and Dax Shepard are one of Hollywood's most loveable couples, so it's hard to believe that early in their relationship, Shepard broke up with Bell. The pair, who have been married since 2013, and have two children together, almost didn't make it, according to Bell.

Speaking to Popsugar, Bell revealed, "We were dating for about three months... He sat me down and said, 'I can't have this right now. I think you're wonderful, but I am still dating other people.' And then I, like, liquefied and fell to the ground, but I felt incredibly respected that he had the balls to tell me we weren't in the same place." So, everyone's favorite couple almost broke up right at the start of their relationship?!

Luckily, this wasn't the end of their love story, and Shepard quickly realized that he wanted to be with Bell. Apparently it only took him four days to call her up and confess, "I don't know what I was thinking. I was dating someone else but they're just not as interesting as you, and I don't know what I'm doing." Thank goodness he realized the error of his ways and got back together with Bell, as our lives would be way more boring without them.

Still, the Frozen star isn't about to let her husband off the hook. As she told Popsugar, "I still always remind him of when he broke up with me." Shepard definitely regrets that move, that's for sure.

Amy Mackelden Amy Mackelden is a freelance writer, editor, and disability activist.
This content is created and maintained by a third party, and imported onto this page to help users provide their email addresses. You may be able to find more information about this and similar content at piano.io
Advertisement - Continue Reading Below
More From Celebrity
Meghan Markle Might Not Ever Go Back to the UK
Are Angelina Jolie and The Weeknd Dating?
Advertisement - Continue Reading Below
Kate and Will Ate Burgers With Their Kids
Meghan Markle's Handbag Was a Nod to Diana
Ben Affleck and Jennifer Lopez Made Out in NYC
Lady Gaga Stunned in an Old Hollywood Look
Olivia Rodrigo Looked Jaw-Droppingly Beautiful
Will's "Alleged Bullying" Drove the Sussexes Out
Sam Asghari Opens Up About Britney Documentaries
Prince Harry’s Memoir Is Concerning Royal Insiders