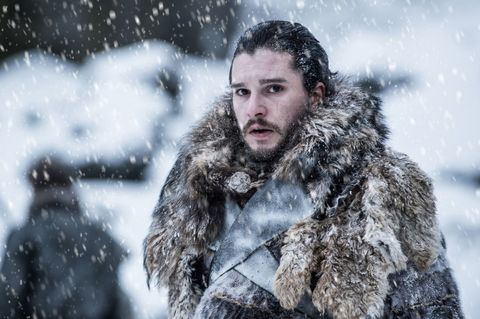 This week's Game of Thrones was ridiculous. Not like "ridiculously awesome," but like "wow, that all made so little sense that I feel anger like dragon fire building in my stomach." GOT is all about going big in the penultimate episode of the season, and "Beyond the Wall" was no exception to that rule. What it was an exception was the satisfying storytelling we've come to expect from Thrones.

Here are all the most rage-inducingly ridiculous things that happened this week.

Jon and his band of zombie hunters have no plan.

Any member of the group: So, Jon, what's the plan?

Jon: We're going to catch a Wight and prove to Dany and Cersei that the Army of the Dead exists!

Any member of the group: Cool! So what's the plan?

Jon: We'll walk North and, you know, catch one.

Any member of the group: Do we know where they might be?

Any member of the group: Okay...So we find one of these things alone—

Jon: No, no, they pretty much always travel in packs of like a hundred.

Any member of the group: Got it. So we...kill all but one?

Any member of the group: And transport it back, with like a Valyrian Steel cage? Or maybe knock it out with some zombie chloroform?

Jon: Questions are for losers. Shut up and let's go.

That zombie bear was such heavy-handed foreshadowing, my kids' favorite fictional dragons felt it.

If you're reading this, you've signed on for spoilers so ~SPOILER~ we lost a dragon this week. The Night King threw an ice spear at it and it died dead and fell into the frozen water. That sounds shocking, right? But it wasn't, because of the zombie bear.

The Game of Thrones writers were afraid we wouldn't believe in a zombie dragon so they made sure to let us know that animals can become Wights too, by spending a lot of time and one expendable no-name member of the group on a zombie polar bear fight and it was so dumb I literally screamed "THIS IS STUPID" at my TV, much to the chagrin of everyone watching with me.

There was inexplicably a conveniently tiny group of Wights traveling conveniently away from the pack with exactly one actual White Walker.

I don't like the White Walkers or the Wights. There, I said it. I watch Game of Thrones for the political intrigue and the dragons and awesomely hilarious, unlikely buddy-cop pairings. I don't watch it for the ice zombies.

That said, I do pay attention when they're onscreen and lately, when they are, it's in giant hoards because they're no longer just a quietly gathering force; they are a full-blown army. So why was there a small group of Wights and one White Walker just hanging out away from the others? Go ahead and argue that they were patrolling or scouting or whatever but we all know the real reason: BECAUSE PLOT. And sorry, GOT, but you're better than that.

Why was there exactly ONE Wight who wasn't created by that White Walker traveling with it?

Speaking of "because plot," how about the ONE Wight that wasn't created by the White Walker that apparently created all the other ones in that tiny group (because they all died instantly when Jon took out the Walker)? That's so convenient, GOT.

How did anyone know Gendry was the fastest?

When sh*t gets real, Jon knows they have to send someone back to get help and he volunteers Gendry as tribute because he's...the fastest? Yeah, okay. When was that established? Was it when Gendry spent three and a half seasons rowing forever back to King's Landing?

And yeah, I know it didn't take him that long to row back—I'm being facetious because I'm angry, but the point is still valid: When was this established? It feels like an excuse to have Gendry not die a week after Thrones brought him back and, in that case, why have him go on this mission at all? It's a waste of everyone's time, especially Gendry's.

THE WHOLE TIMELINE MAKES NO SENSE.

While we're talking about Gendry and his quick feet, let's take a second to review the timeline.

Game of Thrones doesn't give us many clues about the passage of time. Mostly, we just have to be like, "Well, that must have taken a while, so let's assume some time has passed." But the whole ambiguous timeline thing gets really murky this week.

Let's say Jon and his zombie hunters leave Eastwatch at dawn and walk until mid-afternoon while looking for a Wight to capture. Let's also say Gendry actually is the Usain Bolt of Westeros and he makes it back to Eastwatch by dusk and that before anyone works on making sure he doesn't die of hypothermia, they immediately send a raven to Daenerys at Dragonstone.

How fast can a raven fly? How far from Eastwatch is Dragonstone, anyway? Did Dany have time to learn they were in trouble and fly her dragons north to rescue them?

Reddit user Vis-hoka did the math so we don't have to—apparently, it would take the raven about four days to get to Dany, and that's also roughly how long it would take the water around Jon and his crew to re-freeze so the Wights could cross and get them. But even if we accept that, it means that Jon and his crew survived FOUR NIGHTS on that floating ice island surrounded by zombies. With no shelter and no known food or safely-away-from-zombies water. OKAY, SURE.

Also, the Wights might be mindless, but the White Walkers certainly are not. Would they wait four days or just, you know, make a small bridge of some sort? Or just throw a magic ice spear at Jon and be done with it?

Ser Beric doesn't use his flaming sword to try to keep anyone warm at all.

Why didn't we get one shot of Ser Beric using his flaming magic sword like a campfire to keep everyone warm? Or a throwaway line about the magic being in limited supply or ANYTHING?

Jon should have definitely died.

Before Dany and the surviving zombie hunter and dragons fly away, Jon falls into the icy water, pulled down by Wights. After they've flown away, he triumphantly emerges from the freezing water, conveniently right next to Longclaw.

I don't for one second believe that he fought the Wights off and swam back out of the water. I just don't. But, to Game of Thrones' credit, according to the U.S. Coast Guard, the fact that he was fully submerged in water actually increases his chances of survival so at least there's that.

Where TF did Benjen come from?

Benjen Stark should be renamed Deus Ex Machina because that's officially all he is.