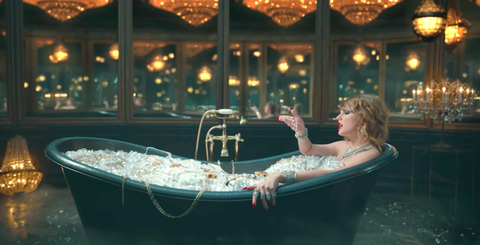 Taylor Swift threw just about everybody under the bus in her new video for "Look What You Made Me Do"—from her old selves, to her alter ego Nils Sjoberg, to Tom Hiddleston's t-shirt, to (*maybe*) Kim Kardashian.

Fans were quick to notice that Tay's video featured footage of herself chilling in a bathtub filled with diamond jewelry and a handful of rings—which they're theorizing is a direct reference to Kim Kardashian's Paris robbery. 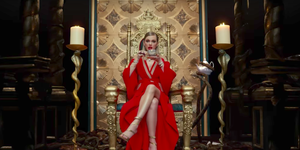 As a reminder, Kim was held at gunpoint, robbed, and put in a bathtub with duct tap around her mouth. Here's how some people felt about the parallel:

Kim Kardashian: robbed at gunpoint for $10 Mil. In jewelry and thrown in a bathtub. pic.twitter.com/OoYy1jjGsy

DIDNT THEY TIE UP KIM K IN THE BATHTUB DURING THE ROBBERY? 😳🙆🏼 #LWYMMDvideo #VMAs pic.twitter.com/6e9hGgN4OU

#VMAS Taylor swift is so sad, she actually sat in a bathtub looking at her diamond ring 2 recreate Kim k robbery wt a loser she's nearly 30

A provocative choice for visuals, sure—but it should be noted that Taylor's fans have jumped to her defense—pointing out that while introducing her song "Blank Space" a few years ago, she made reference to her persona lounging in a bathtub full of pearls:

"She jet-sets around the world collecting men. And she can get any of them, but she's so clingy that they leave, and she cries and then she gets another one in her web. And she traps them, and locks them in her mansion, and then she's crying in her marble bathtub surrounded by pearls."

You can come to your own conclusions while watching her chat it out at 1:28 in the video below: