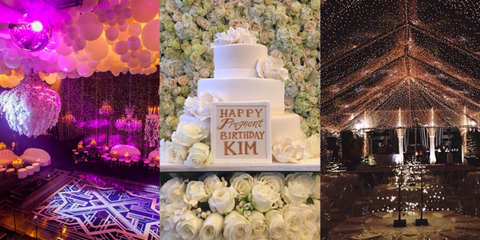 Even the haters have to admit it: the Kardashian-Jenners know how to throw a party. From on-the-fly nuptials to North West's 1st birthday, a celebration of epic proportions is always in order. And thanks to Instagram and the paparazzi, we get to live vicariously through all the Kardashian fêtes. So let's rank them, shall we?

After a pre-wedding party at Versailles, the pair headed to Florence, Italy for the nuptials at the Forte di Belvedere. Andrea Bocelli sang "Con te Partitó" as they walked down the aisle and floral arrangements alone cost $100,000. Need we say more?

The couple in a carriage at Versailles.

Kardashian's wedding to Kris Humphries was so over-the-top it cost an eye-watering $10 million (the flowers alone cost $2 million), but she didn't pay a cent of it thanks to some lucrative deals, like a $2.5 million one with People Magazine and an estimated $12 million to $15 million for the special that aired on E!.

Kim on the dancer floor.

All the famous partygoers.

The Kardashian-Jenner girls giving their mom a toast.

After only knowing each other for a month, the pair got married at a private residence in Beverly Hills underneath arches of white roses. The reception was black tie, but nightclub themed complete with a 10-piece orchestra. Kris Jenner had only a week to plan the wedding, but pulled it off flawlessly, natch.

Lamar with the bridal party.

At Kylie's 18th birthday party at Bootsy Bellows nightclub, her boyfriend Tyga ever-so-casually gifted her a $320,000 Rolls Royce. Not too shabby, considering she also had Fetty Wap and Post Malone perform at the bash.

Before the party, Kylie and the crew dined at Italian mafia themed restaurant The Nice Guy in West Hollywood.

Kris Jenner is famous for her annual Christmas Eve party, and in 2015 she really outdid herself. The theme was 'Candy Cane Lane' and the scene was so festive it could've put the North Pole to shame. How many Christmas trees does one house need, after all? Kris has three in her foyer alone.

Ever inch was *fully* decked out.

Evergreen wreaths and palm trees? It is California...

There were even live reindeer! (Santa was there, too.)

The gang's all here and glitzed to the max. Other famous guests included Drake and Jennifer Lopez.

For West's 38th birthday, Kim threw him a surprise birthday party, renting out the Staples Center so that her hubby could play ball with NBA superstars like Russell Westbrook, as well as Justin Bieber, Tyga, 2 Chainz, and James Harden.

To ask Kim to be his wife, Kanye rented out the San Francisco Giant's stadium and had a 50-piece orchestra play her favorite Lana Del Rey song as "PLEEEASE MARRY MEEE!!!" flashed on the jumbotron. Needless to say, she said yes.

Kim showing off her ring.

West threw Kim a surprise birthday at the Westlake Cinepolis Theater in California, giving her and closed ones a private viewing of Steve Jobs. What's more is that he had all of her friends and family dress up in their favorite "pregnant Kim" looks, baby bumps et al.

Kim looks genuinely surprised, which must've been hard to pull off.

Naturally, West had to bring in white, flower-covered walls.

The Kardashians love Christmas, so naturally Kris had to throw one of her out-of-this-world holiday parties complete with a tent decked in fairy lights, Belevedere vodka bottles in spades, Santa Claus, and chic fashion.

Kendall and Kylie cuddle up to Santa.

Kendall getting down on the dance floor.

The fam threw Kylie a large-scale sweet 16 at the AT&T Center in downtown L.A. and she has the ULTIMATE surprise present: a performance from Drake, which had the entire party getting decidedly turnt.

For Nori's first birthday, her parents threw their own Coachella for kids. Kidchella came complete with a ferris wheel, multiple stages, bouncy house, tie-dye wristbands, face-painting, and many a famous face.

The view from the ferris wheel.

Kendall and her new Range Rover.

In addition to being gifted a Range Rover, there was another surprise in store for Kendall as she rung in 16: a surprise performance from Tyga, who would go on to date her younger sister Kylie.

It would be hard to top North's epic Kidchella party from birthday #1, but her joint bash with cousin Penelope definitely came close. The soirée was mermaid princess themed and had everything you could need to create that 'under the sea' vibe. And Kim got to break out her mermaid costume from several Halloweens ago.

Is this not every little girl's (and our) fantasy birthday party?

It helps when your backyard is basically an oasis already.

Oh, don't mind the mermaids swimming in the pool.

The best use of balloons in party decor ever?

What more could you want when you're *several* months pregnant than to stay in your pajamas and have a massive slumber party? Kim's baby shower while pregnant with Saint was Troop Beverly Hills themed, complete with canvas tents and matching pastel PJs all around. It was glamping at its finest.

Guests were treated to the finest of desserts.

North had her own toddler-sized tent, and seemed to be totally digging it.

More treats and snacks, because we are celebrating a pregnancy here, after all.

Just a casual afternoon with the Kardashian-Jenner sisters.

The family threw Kourtney Kardashian a surprise baby shower inspired by her favorite movie, Breakfast at Tiffany's. From the sumptuous floral arrangements to the Robin egg blue boxes adorning the tables, it was an elegant, Holly Golightly-worthy affair.

Kourtney even had her own diamond tiara.

At their annual Christmas Eve party, the Kardashians were both naughty and nice amidst the dreamy mega-sized tent, North-Pole-worthy Christmas decorations, and cheeky photo booth.

The entryway of the Kardashian-Jenner homebase.

Pretty accurate for these two, no?

Sarah Lindig Senior Digital Editor, Special Projects Sarah Lindig is the senior digital editor, overseeing special projects for Harper's Bazaar.
This content is created and maintained by a third party, and imported onto this page to help users provide their email addresses. You may be able to find more information about this and similar content at piano.io
Advertisement - Continue Reading Below
More From Celebrity
J.Lo Claps Back After Botox Comments
Meghan Wasn't Appreciated for Royal Contributions
Advertisement - Continue Reading Below
Harry & Meghan Have Had a Painful Year Since Exit
The Queen's Hot Grandnephew Is a Thirst Trap
Watch Diana Play Impromptu Piano in Rare Clip
Peek Inside the Cambridges' Country Home
Harry Is Heartbroken About His Family Situation
William and Harry Could Fight Over Diana's Legacy
William Reveals Which of His Kids Is the Cheekiest
Serena Williams's Daughter Is Taking After Mom