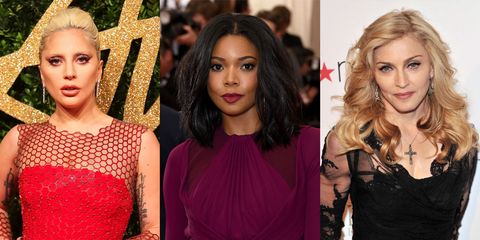 Speaking out against sexual abuse is always scary, but these celebs are using their platform to raise awareness, help eradicate the stigma, and give survivors a feeling that they, too, can be heard. Here, celebrities who have come forward with their tales of sexual assault—may they continue to inspire others to speak out and heal.

The performer opened up about being raped when she was 19 seven years after the fact. Explaining her apprehension to open up, she explained: "When you go through a trauma like that, it doesn't just have the immediate physical ramifications," she said. "For many people it has almost like trauma, where you re-experience it through the years after it. It can trigger patterns in your body of physical distress. So a lot of people suffer not just emotional and mental pain, but physical pain as a result of being abused, raped or traumatized in some way."

The actress revealed in her memoir All That Is Bitter and Sweet that she was sexually assaulted at a young age, but that she's taken steps to move forward. "You know, it's too late to go back and have a happy childhood, but by the grace of God and you know, a pretty simple program of recovery and fellowship, life is good today," she wrote.

The mogul has been open about the sexual abuse she endured at a young age in order for women to feel like they have a voice. "Anybody who has been verbally abused or physically abused will spend a great deal of their life rebuilding their esteem," she said. "Everybody has a story and your story is as equally as valuable and important as my story. My story just helped define and shape me as does everybody's story."

The actress revealed that she had been raped at 19, "I had a summer job at a shoe store. One night, as my coworker and I were closing up, a man robbed the shop and raped me at gunpoint." Union wants the focus to be on her accomplishments and not her traumatic experiences. "People give you attention, people are nurturing—when something catastrophic happens in your life, everyone rallies around you," she said. "You're getting all the attention and love and support that you always wanted. But it's not for something positive, and I hated that."

The performer opened up toEssence about how she was sexually abused as a young child, and the effect it had on her life. "He violated me," she said of her alleged abuser. "I never told anybody; I just buried it as deeply as I could and kept people at an arm's distance. I never really let a person get too close to me. I could have been married years ago, but I had a commitment issue."

Since then, she's learned to cope. "I was a kid, and I had no power or control over the situation. I really wish I'd had the strength and the knowledge to say something sooner," she continued. "Because I always wondered. Did he do that to someone else? But I accept that the time for action has come and gone."

The actress and Dallas star opened up to Cosmo about how a male friend sexually assaulted her in her own home—that she woke up to him in her bed. "At first, I felt so disoriented and numb, I closed my eyes and pretended to be asleep. I wondered if I had done something to give him the wrong idea. I felt afraid of making him angry," she said. "Believe it or not, I didn't want to offend him. I just wanted it to be over. My childhood had come back to haunt me again: Because of the physical abuse, I didn't believe there were borders between other people's bodies and my own. I didn't believe I had a voice."

Now, she's working on spreading her message of standing up for yourself. "I have my message for women and girls: You have a voice. Don't put yourself in a box. Don't let the polite lies of society silence you."

In a truly heartbreaking account, the actress revealed toVanity Fair that she had been sexually abused by her uncle when she was five, and that he later went on to be arrested for the abuse of a 14-year-old neighbor. The girl went on to commit suicide, traumatized by what she had to endure. "I feel such shame, because it felt like I was special," she said. "I was being paid special attention to, told how fabulous I was; this was someone who was supposed to love me, but at the same time you know it's wrong."

Madonna was raped when she was 19, an act she recounted several years later in an interview with Howard Stern. "I was going to a dance class and the door was locked and I needed money for the payphone," she explained. "[This guy] gave it to me, he was a very friendly guy. I trusted everybody." He then persuaded her to make the call from his home instead. "I was raped."

Stern asked Madonna if she had reported the crime at the time. Madonna said no. "You've already been violated," she said. "It's just not worth it. It's too much humiliation."

In 2008, Mo'Nique claimed she had been sexually abused by an older brother when she was seven in an interview with Essence. "Even when I confronted him and told my parents, he said I was lying, and nothing was really done," she said. "My father was very upset, but it never got mentioned again. I'll never forget my mother saying, 'If it's true, it will surface again,' and I remember thinking, 'Why would I lie? Why is there even an if in this?' I was angry with them for so long because I felt as if they should have seen what was happening."