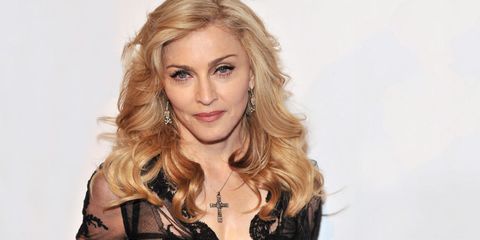 Madonna first bravely admitted that she was raped to Harper's Bazaar in 2013, but while appearing on Howard Stern, the Material Girl gave even more details that left us heartbroken.

Explaining that she had just moved to New York City from Michigan at 19 years old, the singer admitted that she was overwhelmed by everything.

Her apartment kept getting burglarized, but the singer still had high hopes for her life and kept going to dance classes—which is where she encountered her rapist.

"I was going to a dance class and the door was locked and I needed money for the payphone," she explained. "[This guy] gave it to me, he was a very friendly guy. I trusted everybody." He then persuaded her to make the call from his home instead.

Stern asked Madonna if she had reported the crime at the time. Madonna said no. "You've already been violated," she said. "It's just not worth it. It's too much humiliation."

Before you shake your head, you should know—Madonna's not alone. According to the Rape, Abuse and Incest National Network, an estimated 68% of rapes go unreported, and 98% of rapists will not spend one day in jail. One in six women in the U.S. will be raped in her lifetime.

We can only hope that Madonna's case—and others who bring the subject to light—will only help increase awareness, end the stigma, and allow those who have experienced abuse to feel safe enough to report it.

Lena Dunham: I Was Sexually Assaulted in College

Redemption for Rape Victims in the Military (and Everywhere)

Another Day, Another Column Blaming Victims for Sexual Assault

Samantha Leal Senior Web Editor I'm Sam, the senior editor at MarieClaire.com.
This content is created and maintained by a third party, and imported onto this page to help users provide their email addresses. You may be able to find more information about this and similar content at piano.io
Advertisement - Continue Reading Below
More From Celebrity
Gabrielle's TikTok About Her Prom Date is So Funny
Victoria Beckham Shuts Down 'Spice World 2' Rumors
Advertisement - Continue Reading Below
Kendall Jenner Shared Her Experience of Anxiety
'The Voice' Star Blake Shelton Opens Up About Gwen
Sussexes Share New Birthday Photo of Archie
Charles Is Still Upset Over Harry's Oprah Tell-All
Meghan and Harry Share New Archie Photo
The Cambridges Share Their First Full YouTube Vid
Courteney Cox Said the 'Friends' Fountain Was Grim
Meghan Wins Copyright Claim Over Letter to Father