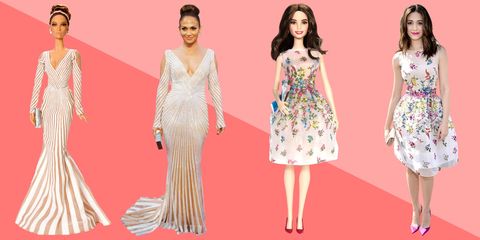 Look, we all wish we could be Barbie girls living in a Barbie world, because—as Aqua poetically tells us—life of plastic, it's fantastic. But only a few chosen ones have the honor of being #BarbieBlessed by the folks at Mattel. Click through the gallery to find out which celebs have been immortalized in doll form, and remember: imagination, life is your creation.

Please get in formation with this Destiny's Child-era Beyoncé Barbie, because it definitely belongs on your nightstand. Nothing lures in a Tinder date like an adult woman owning a Barbie, right?!

We have "Endless Love" for this Diana Ross Barbie, and frankly there "Ain't No Mountain High Enough" to keep us away from it, though at the end of the day our motto continues to be "I Will Survive." (Sorry for literally all of that.)

Mattel/Getty
5 of 24
Elvis and Priscilla Presley

If it's wrong to say Barbie Priscilla and Barbie Elvis are relationship goals, we don't want to be right.

In which we literally cannot tell IRL Emmy Rossum apart from her Barbie doll.

Selma director Ava Duvernay was made into a Barbie as part of Mattel's "Shero" collection honoring powerful women. No one is more worthy.

Oh look, it's Farrah Fawcett's famous 1976 poster come to life! And by "come to life," we mean made into a tiny doll for children who are inexplicably into retro Charlie's Angels re-runs.

Since the majority of us will never be actual princesses, we should probably live life vicariously through this Barbie Grace Kelly, right?

Honestly, it's impossible to look at this doll and *not* have an inexplicable urge for coffee and a side of diamonds.

Kind of offended that J.K.'s Barbie doesn't come with a sorting hat, but we'll take it.

Clap-clap-clap to the Barbie hair team, because this shag is 👌.

Okay, we see you guys, but where is the cute bored flower girl doll?

This is our favorite celebrity Barbie of the bunch for obvious reasons relating to cupcakes.

Heidi helped pick an outfit for her Barbie, and said it was "very important" that she wear cute underwear underneath. #Priorities.

Kinda wish this Barbie was wearing Jennifer's infamous 2000 Grammy dress, but guess we get the J.Lo we deserve.

Note the face mole. It's all in the subtle detail work, guys.

Reppin' Barbie's favorite color like it ain't no thing.

Misty Copeland is The American Ballet Theater's first African American Principle Dancer, so yeah—this doll is much more than a simple toy.

Apparently, Elizabeth Taylor approved "the face sculpt" on this doll, so do with that information what you will.

How much do you love the fact that Mattel chose Zendaya's Oscar beauty look for her Barbie? A powerful statement to those who criticized the actress' decision to wear her hair in locs for the red carpet.

If any hater is *still* debating  Hadid's supermodel status, she's now next level iconic with her very own Barbie. Hadid and frequent collaborator Tommy Hilfiger announced the released of the Gigi Hadid Barbie on Insta. Naturally, the Barbie is wearing a classic Tommy Jeans outfit and it's all kinds of perfect. 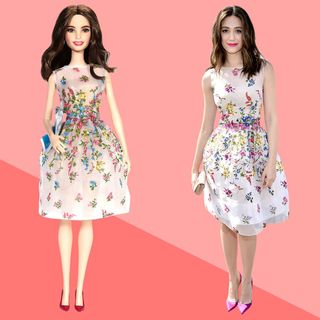