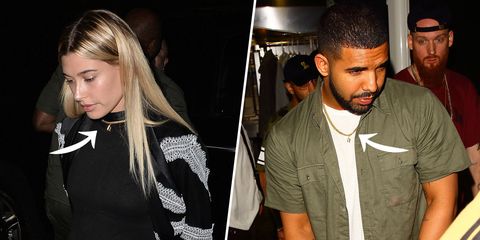 Sometimes a celebrity (cough, cough, Madonna) will come right out and say what message she intended to send with an outfit; otherwise, they're content to let the public derive meaning for themselves. So...a slogan T is just a slogan T—or is it?

As subtle as a Facebook relationship update. (Read: She and Liam Hemsworth are very much back on, as if the PDA hadn't tipped us off.)

On that fateful night at The Nice Guy (it's an L.A. lounge, people), the rumored couple appeared to have traded accessories, with Drake leaving conspicuously alone but with the addition of her initial pendant. More kindling on the bonfire.

Lesson: Cut out the middleman, and come up with your couple name yourself.

Deep in the throes of the witch hunt for Becky with the good hair, Rita Ora did her part to raise tensions with this provocative Snap. (For the last time, it's an R not a J, SMH.)

Both women are known for speaking out about female sexuality and the instances during which they've been shamed for it. At the 2015 VMAs, Chyna and Rose wore ensembles emblazoned with sexist words as an act of reclaiming those terms.

She wore actual garbage...to the Met Gala. (And, fine, wrote a Facebook manifesto to accompany it, but still.)

Chelsea Peng I'm Chelsea Peng, the assistant editor at MarieClaire.com.
This content is created and maintained by a third party, and imported onto this page to help users provide their email addresses. You may be able to find more information about this and similar content at piano.io
Advertisement - Continue Reading Below
More From Celebrity
See a Rare Portrait of Princess Diana's Mother
Kelly Ripa's Husband Left Her a NSFW Comment
Advertisement - Continue Reading Below
Jennifer Lopez on Learning to Love Herself
Diana's Wedding Interview Footage Is Telling
The Queen May Honor Kate Later This Year
Olivia Wilde & Harry Styles Keep It Profesh on Set
Prince Harry on How Tabloid Attacks Changed Him
Watch Orlando and Katy After Her Performance
Kate Middleton Debuted Long, Straight Hair
Prince Harry's Surprise Inauguration Appearance