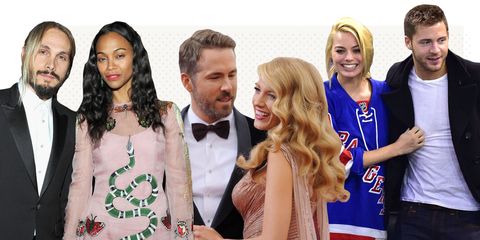 Like the heart (allegedly), the public wants what the public wants. And that is to know, down to the last Jordan almond, what our famous people wore, did, and what version of "(I've Had) the Time of My Life" they danced to on their wedding days. Too bad keeping everything more under wraps than regular, non-Mummy mummies is such a fad now. Ahead, 15 marriages we still, infuriatingly, know so little about.

He took her name (<3), but, like, couldn't he have taken some wedding pics so we have a bit more than an extremely meager amount of intel about their London ceremony in 2013? "It was super small but very romantic and beautiful," a source said to Us Weekly of the nuptials, which were attended by just a few close friends and relatives.

Well, that's over now, but in 2014, it was a BFD—such a BFD, in fact, that we still don't know much, except that Angie's Atelier Versace dress and veil served as a canvas for her kids, who were also involved in the ceremony.

Little by little, we're getting a better understanding of the incredibly good-looking couple's 2009 wedding. For example, after almost 10 YEARS, we can now confirm the bride wore white.

9 years already??? Congratulations to the Carters❤❤on their Anniversary 💐 ( thats my arm fixing the dress lol) Thats my minister Rudy Rasmus who married Solange, Beyonce and me❤

Just today, Tina Knowles shared this never-before-seen photo from the actual #mosttalkedaboutcoupleintheworld's wedding. But...did they dance to their own music at the reception? Who caught the bouquet? WAS THERE BUTTERCREAM?

"I've never said this television before—we are married," he said of his longtime rancher partner on Hollywood Today Live. "I met him on the dance floor at Limelight in 1994 on his birthday. We got married this year on the anniversary of when we met." That's pretty much all we've got, but we'll take it. <333

This is *still* all there is to be seen of her custom Marchesa gown and Lorraine Schwartz wedding band. However, if you are interested in the espresso beans and fruit tarts served at the reception, there are tons of photos of that, hmph. ::clicks anyway::

Here's the dress, which had sleeves because she's "always cold!" But what did Tom Hanks say when he officiated (ah)? Why was it in Wyoming?! We may never find out.

The secret-marrieds club's newest members have a kid now! But before that, "we eloped," Sadoski said on the Late Late Show with James Corden. "We just took off into the country with an officiant and, just the two of us, and we did our thing." Tell us more about the thing!

To tie the knot with the British director earlier this year in Australia, (it appears) Robbie wore her mother's dress, then immediately headed to the beach. Noice.

Belated congrats to these beautiful 👼🏽 on getting hitched. Love you hard and deep. You're truly #RelationshipGoals and inspire me. #YQY 📸: @chiokenassor

Catching most of the internet unawares, the comedienne and her scientist boyfriend got hitched at a low-key City Hall ceremony. We can only assumer her other *other* half Abbi Jacobson was in attendance.

Three years after she and Shepard married "in a tiny room in Beverly Hills courthouse," Bell finally shared some private photos of what she called "one of the best days of her life." Awww.

They got secret-married. Then they didn't. Then they actually did! After jerking us around a bit, the couple finally owned up to being man and wife with rings from Etsy. And that's it, pretty much.

Their union just produced a second child, but the details of their 2016 Big Sur wedding are still hazy. Key info: It was vegan; the dress was Rodarte; and Ivanka Trump was reportedly a guest.

Pretty epic that they pretended the wedding was a birthday party for Theroux. Even more epic that the goings-on have remained so watertight, even with high-profile guests such as Lisa Kudrow, Ellen DeGeneres, and John Krasinski and Emily Blunt.

Fourteen years later, and there are still no photos—that's how stealth the whole 2003 operation was. (For comparison, news of their conscious uncoupling was sent out in the Goop newsletter.) According to People, they got the license at the Santa Barbara courthouse, then did the deed—without even Paltrow's mother Blythe Danner there as a witness.

Chelsea Peng I'm Chelsea Peng, the assistant editor at MarieClaire.com.
This content is created and maintained by a third party, and imported onto this page to help users provide their email addresses. You may be able to find more information about this and similar content at piano.io
Advertisement - Continue Reading Below
More From Celebrity
The Royals Won't Wear Uniform at Philip's Funeral
Jennifer Lopez and Alex Rodriguez Announce Breakup
Advertisement - Continue Reading Below
Charles Teared Up As He Read Tributes to Philip
The Gucci Family Is Upset About 'House of Gucci'
Taylor Sent the Sweetest Gift to a Frontline Nurse
Royal Family Shares Rare Photo of Prince Philip
Chloe From 'Too Hot to Handle' Is in 'The Circle'
There's Drama Over Prince Harry's Funeral Attire
Jennifer's Rep Breaks Silence on Adoption Story
Princess Eugenie's Prince Philip Tribute