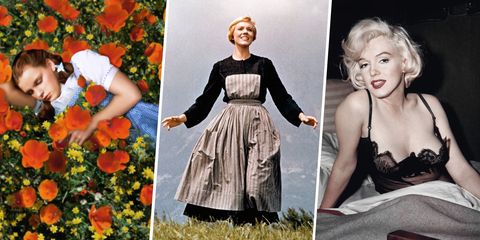 Invented by awesome cartoonist Allison Bechdel, the Bechdel Test is a rubric for whether or not a film has a decent amount of female representation (hint: most of them don't). The test consists of three simple questions:

Are there are least two female characters in the film, whose names we know? If yes, continue.

Do these characters talk to each other? If yes, continue.

Do they talk about anything other than a man? If yes, then the movie passes!

Sounds simple, but you'd be amazed how many movies still fail the Bechdel Test to this day. That said, here are a few classics that managed to earn the Bechdel stamp of approval.

Despite being a group of male comedians, Monty Python has famously portrayed many interesting, compelling women—including in Life of Brian. The film passes the Bechdel Test when Loretta (a transgender character played by Eric Idle) discusses her gender identity with Judith (played by Sue Jones-Davies). Up until this point in the film, the characters refer to Idle's character as 'Stan' and 'Brother,' but they refer to her as 'Loretta' and 'Sister' after this—without making a joke out of it. Pretty progressive for the '70s, no?

It's not surprising that a movie that partially takes place in a convent passes the Bechdel Test—and it does so pretty early on, when Maria is persuaded by the Mother Abbess to work for the Von Trapp family and reconsider her life goals.

Since The Exorcist mostly takes place in the home of single mother Chris MacNeil and her daughter Reagan, the movie passes the Bechdel Test almost as many times as it scares us.

Another terrifying movie about a mother and child (AKA the spawn of the Devil!). This movie is chock-full of interesting women with way more than men on their minds, and it passes the Bechdel Test when Rosemary talks to her neighbor Terry about her difficult past.

This movie gets bonus points for having the two male main characters learn first-hand what the world is like for women—and being funny as hell to boot.  The film passes the Test when trombone player Dolores questions her band conductor's decision to put her in the same hotel room as the ditzy Sugar (played by Marilyn Monroe).

While not all of his films pass the Bechdel Test, Alfred Hitchcock often included strong women in his stories. And sure, Grace Kelly's character mostly talks to nurse Stella about James Stewart—he is playing her boyfriend, after all—but they also talk about other things, giving this film a soft pass.

Entire books have been written about the feminist implications of Elizabeth's Taylor's career—both on and off the silver screen. In one of her first films ever, the actress plays Velvet Brown, a young girl who wants to buck societal expectations by becoming a horse jockey. The film passes in a beautiful scene where Velvet's mother Edwina talks about her own girlhood dreams.

L. Frank Baum's Oz series was written during the rise of the First Wave of Feminism, and it shows. His world is teeming with powerful, interesting female characters. Oz itself is a matriarchy, run almost exclusively by Queens, Witches, and other female rulers. So it comes as no surprise that the 1939 film passes the Bechdel Test with flying colors—the first instance of which is when Auntie Em tells Dorothy that she's too busy counting chicks to listen to her stories.

There's no denying that this movie is problematic. It takes place in the Antebellum South and handles that with all the racial sensitivity you'd expect from Hollywood in the late '30s. But it's still a classic, and it passes the Bechdel Test several times over—including a few of the conversations shared by Scarlett O'Hara and Melanie Hamilton.

This content is created and maintained by a third party, and imported onto this page to help users provide their email addresses. You may be able to find more information about this and similar content at piano.io
Advertisement - Continue Reading Below
More From Celebrity
The Queen Displayed a Rare Photo of the Sussexes
Justin Backs Britney After Conservatorship Hearing
Advertisement - Continue Reading Below
Jen Aniston Said a Male 'Friends' Star Was Rude
Jennifer Aniston on "Silly" Love Life Speculation
People Are Devastated by Britney's Revelations
Britney Spears on "Abusive" Conservatorship
'Too Hot to Handle' S2 Was Filmed In Paradise
About That "Sexy Nerd" From 'Too Hot to Handle'
Prince Charles Is Leaving London When Harry Visits
What Happens on Katie's Season?