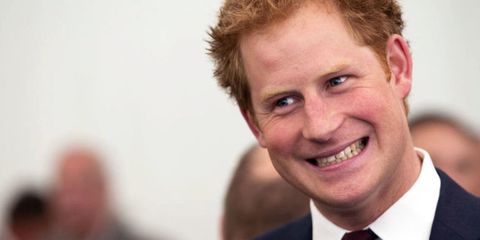 Prince Harry is, inarguably, a real life Prince Charming. But before he was walking in his mother's charitable footsteps, growing the world's most impressive beard, dating Meghan Markle, and being an otherwise stand-up royal, he engaged in *quite* a few cringe-worthy moments and scandals. Including dressing as a Nazi, using racial slurs, and getting in public scuffles with photographers. Brace yourselves.

Advertisement - Continue Reading Below
That Time He Dressed as a Nazi

For reasons best described as "WTF were you thinking?" Harry attended a circa 2005 costume wearing a Nazi uniform, and understandably experienced major backlash. The Prince ended up apologizing, saying "[I am] very sorry if I caused any offense or embarrassment to anyone. It was a poor choice of costume and I apologize." Meanwhile, Tony Blair's office chimed in by musing "Clearly an error was made that has been recognized by Harry, and I think it is better that this matter continues to be dealt with by [Buckingham] Palace."

That Time He Used Racial Slurs

While filming a "home video" of his fellow training officers at the Sandhurst military academy in 2006 (the footage itself went public in 2009), Prince Harry used the racial slur "Paki" to describe his friend. He also used the term "raghead." St James's Palace issued an apology on behalf of Harry, saying "Prince Harry fully understands how offensive this term can be, and is extremely sorry for any offense his words might cause. However, on this occasion three years ago, Prince Harry used the term without any malice and as a nickname about a highly popular member of his platoon. There is no question that Prince Harry was in any way seeking to insult his friend."

The Equality and Human Rights Commission asked for a formal inquiry into Harry's comments, and Dave Cameron said "It is obviously a completely unacceptable thing to say and it is right that he has apologized."

That Time He Went to Rehab for Weed (Hmm, Kay)
Getty Images

At the age of 16, Harry was sent off to rehab for smoking weed and drinking. The prince reportedly visited Featherstone Lodge Rehabilitation Centre in Peckham for just one day at the request of his father. St James's Palace said "This is a serious matter which was resolved within the family, and is now in the past and closed."

That Time He Stripped Naked in Vegas

Back in 2012, Prince Harry took a trip to Vegas and decided to partake in a casual game of strip billiards. He took the game very seriously, and TMZ got their hands on some nude images. The Atlantic reported at the time that Clarence House had no official comment, but did confirm that the man in question was Prince Harry.

That Time He Got into a Scuffle with a Photographer

Meanwhile, the photographer said "[Harry] lashed out and then deliberately pushed my camera into my face. The base of the camera struck me and cut my bottom lip. At the same time he was repeatedly saying, 'Why are you doing this? Why don't you just leave me alone?'"

That Time He Got into *Another* Scuffle with a Photographer

Harry had another incident with a photographer in 2007, but his rep brushed it off, simply saying "On the way out of the nightclub, he stumbled on the curb and fell on the photographer. There was no aggressive intent; they were laughing at it at the time."

That Time He Got Drunk and Fell into a Pool

Less of a cringe/scandal and more of a "Prince Harry Is All of Us" moment, who can forget the time he danced so hard that he fell into a swimming pool? Bless.

That Time He Was Accused of Animal Cruelty
Getty Images

We all know how much Prince Harry loves polo, but he was accused of animal cruelty in 2010 when his horse was injured by spurs during a match (note: injury-inducing spurs are not allowed in matches). St James's Palace claims Harry stopped playing as soon as the injury took place, but others claim he kept riding the animal. The Hurlingham Polo Association launched an investigation, and he was eventually cleared of wrongdoing.

Yep, vodka. Apparently this incident went down when Harry was Namibia—and the photos/video were quick to be scrubbed from the internet after being leaked.

Mehera Bonner Contributor Mehera Bonner is a news writer who focuses on celebrities and royals—follow her on Instagram.
This content is created and maintained by a third party, and imported onto this page to help users provide their email addresses. You may be able to find more information about this and similar content at piano.io
Advertisement - Continue Reading Below
More From Celebrity
Why Isn't Archie Mountbatten-Windsor a Prince?
A Body Language Expert on the Oprah Interview
Advertisement - Continue Reading Below
See an Adorable New Sussex Maternity Shoot Photo
Why Is the Royal Family Called "The Firm?"
Read Serena Williams' Statement on Oprah Interview
The Internet Reacts to Meghan and Harry Interview
Prince Harry: The Queen Was Advised Not to See Me
The Palace Had Concerns About Archie's Skin
Harry Says Racism Was "A Large Part" Of Leaving
Stacey Abrams on Her Election Wins & What's Next