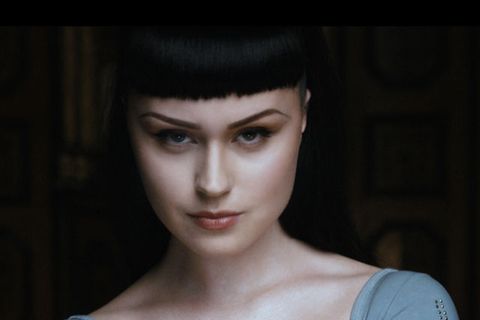 As new music video "Prototype" proclaims in its title, Viktoria Modesta is a new kind of pop star altogether. The 26-year-old Latvian singer is sexy, talented, and an amputee: After undergoing 15 surgeries at a young age to repair a leg that had been damaged at birth, Modesta elected to fully remove the appendage in order to improve her life.

Six years later, she's singing about her transformation, the freedom her choice has given her, and the fact that she—with her less than mainstream body type—is the model of the future: "Assemble me, piece by piece/ Strip away the incomplete, the model of the future/ Colliding minds, it's just a start/ Feel the sparks, we're building art/ It's the vertigo of freedom."

"Forget what you knew about disability" is the message that appears at the start of the video. And Modesta drives that point home throughout the six-minute clip during which we watch her sport a light-up limb, dance like Katy Perry, and take down her enemies with a move plucked from Basic Instinct.

See the full video below, never be the same:

Sally Holmes Digital Director Sally is the Digital Director of MarieClaire.com where she oversees coverage of all the things the Marie Claire reader wants to know about, including politics, beauty, fashion, celebs, and Prince Harry's facial hair.
Advertisement - Continue Reading Below
More From Culture
Candice Marie Woods on Playing Diana Ross
45 Iconic '90s Movies to Binge-Watch Right Now
Advertisement - Continue Reading Below
You Can Get a ‘Golden Girls’ Birthday Party Kit
Meet the Star of 'The Bachelor's ChampagneGate
Hannah Ann Sluss From 'Bachelor' Was a Model
Who Is 'Bachelor' Peter's Mom Talking About?
Who Is Hannah Ann Sluss From 'The Bachelor'?
Who Is 'Bachelor' Contestant Victoria Fuller?
Who Is 'Bachelor' Contestant Madison Prewett?
Who Are the Women of 'The Bachelor' in 2020?