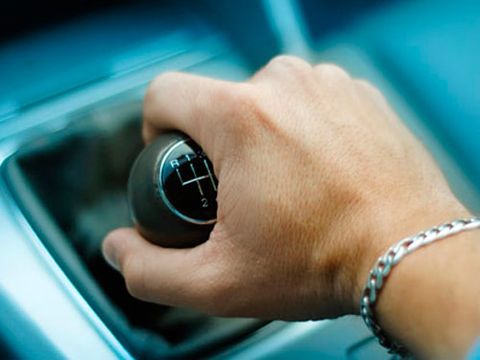 Unless you grew up on a farm or have dated a drag racer, chances are you've never needed to drive a stick shift. Since the 1950s, most cars in America have come equipped with an automatic transmission, which does all the gear shifting behind the scenes.

So why should you learn how to drive a stick shift? Well, for one thing, it's sexy. Half of driving stick shift is about knowing how to use your body. Yes, talking on your headset, applying makeup, and sipping a latte while driving takes considerable coordination, but driving stick involves a different kind of multi-tasking. To drive stick you need to be completely focused on driving, using both hands and feet to operate the car. You'll even develop a feel for when the gears are shifting under your feet – and what guy could resist a girl that in tune with her car?

Driving stick can intimidate even the most confident drivers, but it really isn't that hard. In Europe and Asia almost all drivers learn to drive manual transmission and those who only know automatic often receive a restricted driver's license. Once you learn, you may find it's more fun than being able to text and drive at the same time (not that you should ever do that).

Generally first gear is for 1-15 mph, second is for 15-30 mph, third is for 30-45 mph and so on. Most cars have four to five gears and reverse. As the name suggests, "neutral" is actually the absence of a gear. If you step on the gas pedal in neutral the car won't move, but it will make a revving noise. This looks cool, but it's actually bad for the car. It's a sacrifice all those '50s hot rodders were willing to make.

To start the car in gear, hold the clutch down. Let it up slowly while giving the car gas. The more you let up on the clutch, the faster you'll go.

What usually frightens beginners is that if you miss the gear or release the clutch too quickly you can lurch ahead or stall the car. This happens to everyone but it's best to get used to it before you're in rush hour traffic.

Once you've mastered the basics, you're ready for the best part: acceleration. When you're moving steadily and you start to hear a revving sound, take your foot off the gas and step on the clutch with your left foot. Shift from first to second, and give the car gas while slowly letting up the clutch.

Downshifting is an important feature that automatic transmissions don't really have. If the weather is bad or you're on a hill, you may want to be going slower but not immediately apply the breaks. In a manual transmission you can just shift down to a lower gear to slow down.

To stop completely you can either step on the clutch and keep the car in gear, or put the car in neutral and take your foot of the clutch. When you need to go again, press the clutch, shift into first and give the car gas. Use the emergency brake when you park because there is no parking gear.

You may not be driving a big rig anytime soon, but with a little practice, you'll be able to lurch along with the best of them.