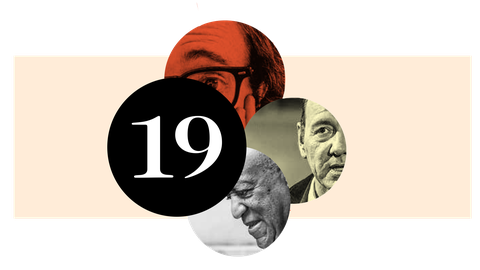 Growing up, I loved The Cosby Show. My brothers and I were allowed only an hour of television a week, so it meant something to spend part of that time with Bill Cosby and his television family. As a middle-class black girl, I was affirmed to see something of my life reflected back to me. Such representation was elusive and necessary and incredibly meaningful. The impact Cosby had on me cannot be overstated.

As I got older and began to hear stories about Cosby’s penchant for sexual assault, I wanted to look away. It didn’t seem possible that the man who brought us Cliff Huxtable could also be a sexual predator. But I try to believe people when they say how they suffered. I know what it takes to come forward as a victim of sexual violence, and that when the perpetrator is famous, it takes everything, with so little to be gained. As the extent of his predation was laid bare, the sheer number of women Cosby victimized staggered me nearly as much as some people’s willingness to still consider his artistic legacy, despite the damage he did.

Every time I think of Cosby’s work, I remember the women he victimized and how their silence was trapped by the gilded cage of his fame. To me, Cosby’s artistic legacy is rendered meaningless in the face of the pain he caused. It has to be. He once created great art, and then he destroyed his great art. The responsibility for that destruction is his and his alone. We are free to lament it, but not at the expense of his victims.

Toward the end of 2017, a dam of silence broke and women and men began coming forward in unprecedented numbers, giving voice to how they were assaulted, harassed, intimidated, silenced, and otherwise demeaned by powerful creative men. A great many legacies have been rendered meaningless by these testimonies even though the debate about whether that should be the case inexplicably continues.

"We can no longer worship at the altar of creative genius while ignoring the price all too often paid for that genius."

We can no longer worship at the altar of creative genius while ignoring the price all too often paid for that genius. In truth, we should have learned this lesson long ago, but we have a cultural fascination with creative and powerful men who are also “mercurial” or “volatile,” with men who behave badly.

These men are given wide berth. Their prominence grants them a certain amount of immunity. We forgive their trespasses because they create such brilliant work, because they are so charismatic, because there is such an allure to people who defy cultural conventions, who dare to do whatever they want. Whether we’re talking about Bill Cosby or Woody Allen or Roman Polanski or Johnny Depp or Kevin Spacey or Harvey Weinstein or Russell Simmons or any man who has built his success on the backs of women and men whose suffering was ignored for the sake of that success, it’s time to say that there is no artistic work, no legacy so great that we choose to look the other way.

"I no longer struggle with artistic legacies."

I no longer struggle with artistic legacies. It is not difficult to dismiss the work of predators and angry men because agonizing over a predator’s legacy would mean there is some price I am willing to let victims pay for the sake of good art, when the truth is no half hour of television is so excellent that anyone’s suffering is recompense. Instead, I remember how many women’s careers were ruined; I think of those who gave up their dreams because some “genius” decided indulging his thirst for power and control mattered more than her ambition and dignity. I remember all the silence, decades and decades of enforced silence, intimidation, and manipulation, that enabled bad men to flourish. When I do that, it’s quite easy for me to think nothing of the supposedly great art of bad men.

There are all kinds of creative people who are brilliant and original and enigmatic and capable of treating others with respect. There is no scarcity of creative genius, and that is the artistic work we can and should turn to instead.

Roxane Gay is the author of Bad Feminist, Difficult Women, and Hunger.