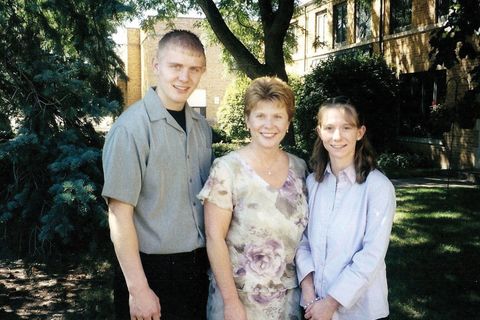 Locked in a hotel room with an abusive man for more than three months, Jessyca Mullenberg actually forgot who she was.

Early on the morning of Sept. 16, 1995, a friend of my dad's—a 38- year-old writing teacher named Steve Oliver—picked me up for a trip from Eau Claire to Madison, Wisconsin. We were going to oversee the layout of a book of my writings. Although I was only 13 years old and in the seventh grade, Oliver had told my dad that he'd submitted my work to Random House, and they actually wanted to publish it. I packed CDs, a T-shirt, a pair of pants, and a swimsuit. We left at 7 a.m., while my brothers, sisters, and stepmom were still sleeping. I dozed off during the drive, and when I awoke, I was tied up.

"Here's how it's going to be," Oliver said in a low, terrifying voice. "You are no longer Jessyca. Your name is Cindy Johnson. My name is David Johnson. I'm your father. If anyone asks why you look so sad, it's because your mother and twin brother recently died in a car accident."

That was the beginning of the most horrifying three months of my life. Oliver drove to the Kansas City airport, where he held a concealed knife to my back as we boarded a plane for Houston. There, we stayed in two different seedy hotels before settling into a Days Inn near the airport. That's where I remained—most of the time locked inside a room—for the next 101 days. And almost every day, my captor forced me to have sex with him.

How did he get away with this? Why did I do what he told me? Why couldn't I escape? Why did I forget who I was for a while? These are the questions people asked me then ... and now, more than 10 years later. I tell them it is simply an unimaginable experience—an experience I am still recovering from today, at age 24.

I first met Oliver in third grade, when he was a teacher's aide at my school. He and his son lived next door to my mom (my parents were divorced). Oliver invited kids over to play in his yard or watch videos. A balding man with thick glasses, he made me sit on his lap. I remember the awful smell of his body odor mingled with cigarettes and coffee. Although he always wore a dress shirt buttoned right up to the collar, he looked dirty.

Steve Oliver before the abduction.

He began sexually abusing me in his house—he would tell me I'd done something bad and order me into the kitchen. There, if I didn't touch him the way he wanted, he'd hit me. Eventually he was forcing intercourse and oral sex on me, sometimes twice a day. He would punch me on the legs or back, or strike me with a broom.

His abuse was psychological as well as physical. He told me I was stupid, useless, and ugly, and no boy would ever date me. He terrorized me with threats of what he would do if I ever told anyone about us. The one time I resisted, he stabbed me in the stomach with the tip of a knife. I bled all over, but he refused to take me to the hospital, ordering me to bandage myself. If anyone ever found out, he warned, he'd murder my entire family. After that, I didn't resist anymore.

But finally, in the fifth grade, it seemed my gruesome nightmare was over. My stepfather and mother moved our family to another town. I was so happy—at last I was free! But I wasn't. Almost immediately, Steve Oliver showed up and began calling my house, asking me and my brothers to play with his son. My mother called the police, but that didn't stop him. He returned to Eau Claire and moved into a trailer near my dad, knowing I visited him every other weekend.

Oliver convinced my dad that I should join his children's publishing workshop. Each week, we wrote poems and essays, but now I think the main purpose was to lure kids to have sex with him. I'm pretty sure he abused another girl in the group. I didn't know it then, but the police were closing in on Oliver for wire fraud, and he decided to flee. But he wasn't leaving without his little girl.

Jessyca Mullenberg before the abduction.

A Life in Hiding

After my abduction to Houston, Oliver cut my hair short and dyed it from blonde to dark brown, and he made me wear baggy clothes so I looked almost like a boy. He told the management at the Days Inn the story about my mom and brother's death in a car accident. They felt sorry for him and hired him as a maintenance man. We lived among a block of vacant rooms that weren't up to building code, and he used to lock me inside all day and night, checking in every now and then. If I didn't follow orders, he'd tie me to the bed or beat me.

At first, I was hopeful that my parents would find me. As the days went by, I agonized: How long would it take before I was rescued? Was I ever going to return home? Would I ever see my family and friends or have a normal life again? As long as I was with Oliver, I knew the pain would never end. I tried calling home but kept getting wrong numbers. I finally figured out that he'd altered the phone so that if I dialed a two, it might actually be a five or an eight.

Then I stopped trying. Something in me had started to change —to give up. Over and over, Oliver told me my real parents hated me and no one would ever love me. I'd heard that from different adult men since I was 5. If you hear something enough, you believe it. He also made up memories for me as Cindy Johnson until I could no longer discern the difference between my life and this false life that was forced upon me.

Jessyca and her family.

Oliver watched America's Most Wanted religiously for anything that indicated the police were on his trail. The one evening he didn't watch, I later learned, was the night the pro- gram aired a segment about my kidnapping. A woman working in the hotel restaurant recognized Oliver from his photo and called the show.

Some time around 2 a.m., FBI agents entered our room. They shoved Oliver against the wall and took me aside and asked me my name. "Cindy Johnson," I answered. "No," an agent said. "Your name is Jessyca."

But by now, I really thought my name was Cindy Johnson. Only after they showed me photos of my parents at the field-office headquarters could I remember my mom and stepdad. I knew part of our address, but our home phone number was gone. I'd been brainwashed. The agents tried to help me understand. They questioned me from the time they rescued me until my mom's plane landed the next afternoon, Dec. 29, 1995.

As soon as my mom got off the plane, I didn't need anyone's prompting. I ran into her arms. One hundred and five days after Oliver kidnapped me, I was back with my family. From every direction, reporters shouted questions and took my picture. The FBI agents told me that at that time, I was 1 of only 13 missing children to be found alive in the entire country.

I didn't talk to my parents about what happened during my kidnapping. I came home on a weekend, and that Monday, I went back to school because I desperately wanted life to return to normal. My old friends didn't know what to say to me though, and other kids taunted me, asking, "Why didn't you try to get away?"

It's a question that's haunted me ever since. Everyone says, "I would have done this or that," but they weren't there. Could I have gotten away? No. I'd just turned 13, I weighed 100 pounds, and Oliver had previously stabbed me to keep me quiet. I figured if he had it in him to do that, he could kill me.

Fortunately, some wonderful teachers helped me overcome the bullying and keep my spirits high. I earned good grades, created art projects, and worked at after-school jobs. They enabled me to not let Oliver take over my future as he had my childhood. When the trial took place in June 1996, I testified for hours. Oliver and his lawyers argued that I'd run away willingly, luring him to Texas. The jury didn't believe them, and my tormentor received a 40-year prison sentence without parole. I'd also told the FBI and police about the two other men who had molested me as a little girl, and they both were convicted.

After high school, I went to the University of Wisconsin at Stout and majored in psychology with minors in criminal justice-law enforcement and sociology. I graduated last year with honors. It's very unusual for a kidnapped kid to finish high school, much less college. But the more anyone said I couldn't, the more determined I became to succeed.

My kidnapping changed me for life—on the inside and on the outside. Oliver hit me in the face so many times, my bones never fully developed and started to deteriorate, resulting in 10 jaw surgeries in a year. I was diagnosed with fibromyalgia, a muscular disorder so debilitating that at times, I can barely walk. I hate to fly on planes because I was forced to board one shortly after I was kidnapped. I can't stand the smell of coffee, because Oliver's breath always smelled of it.

For a while, I believed violence was normal and became the victim of an abusive boyfriend. As I grew stronger, I left that relationship, and now I won't tolerate anyone who yells at me, hits me, or degrades me in any manner.

Even though trusting people is very hard, I hope to marry one day and have children. I met my current boyfriend, Curt, at the bowling center where we worked. We began as friends and have now been together for more than two years. We have our good times and bad times, and I still have difficulties opening up, but I'm trying to remain positive.

I simply won't let Oliver win. Whenever I can, I speak at schools and conferences about sexual abuse. My goal is to attend graduate school and then to have a career as an advocate for those who have been kidnapped or sexually abused, or I may work in foster care. I'm leaving my options open. But I'm devoted to doing everything I can to prevent another little girl or boy from becoming a victim.