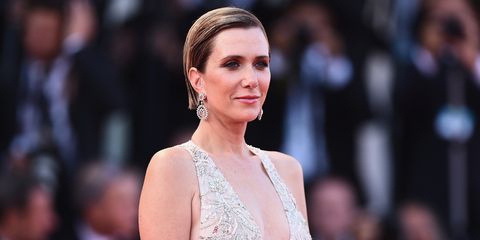 Wonder Woman fans have been speculating for months about who Diana's next nemesis will be, and now director Patty Jenkins has officially announced who Gal Gadot will face (and, likely, defeat) next. After speculation that Kristen Wiig would join the cast, the director has finally confirmed that she will take on Gal Gadot for the sequel.

"So excited to confirm the most thrilling news. Yes! It’s true! So incredibly lucky to welcome the sensationally talented Kristen Wiig to our Wonder Woman family. Can't wait to finally work with one of my favorites. And SO excited by what we have planned."

So excited to confirm the most thrilling news. Yes! It’s true! So incredibly lucky to welcome the sensationally talented Kristen Wiig to our Wonder Woman family. Can't wait to finally work with one of my favorites. And SO excited by what we have planned. #Cheetah!!! @GalGadot pic.twitter.com/Gn0jICiIAH

Saturday Night Live alumna Kristen Wiig will be suiting up to face off against Gal Gadot in the hit film's sequel. She will be playing Cheetah, who processes superhuman strength and speed. Rumors of Kristen Wiig's casting were first released by Deadline last week.

Cheetah is one of Wonder Woman's oldest foes and has has a number of incarnations throughout the Wonder Woman universe. It is expected that Wiig will be playing Cheetah's most popular incarnation, Dr. Barbara Ann Minerva, which was created by writer Len Wein and artist George Perez in the 1980s.

Not much is known about the sequel so far. Both director Patty Jenkins and Gal Gadot are scheduled to return. No other stars other than Wiig and Gadot have been confirmed for the film. It currently has a release date of December 2019. According to The Hollywood Reporter, the film will be set during the Cold War in the 1980s.

Wonder Woman was one of the top films of 2017. The sequel will be the 8th film in the DC Extended Universe, following Aquaman and Shazam!