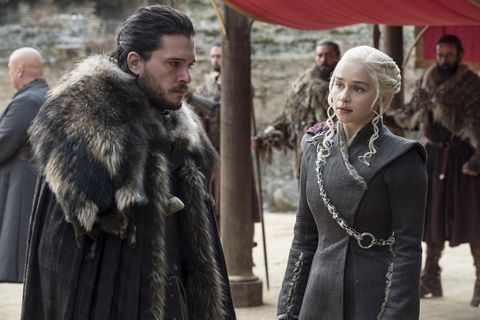 This post contains spoilers through Game of Thrones Season 7.

Game of Thrones has been criticized in recent seasons for being, well, less murder-y. While George R.R. Martin is ruthless, killing off beloved characters out of the blue (RIP, Ned Stark, Robb Stark, Catelyn Stark, and Joffrey, who we loved to hate), GOT has been much kinder in general of late, especially when it comes to core characters. Last season, the show even saved some characters who really seemed like they were going to die (we're looking at you, Tormund and Jaime).

That is changing in Season 8. In Game of Thrones' final season, no one is safe and it sounds like just about everyone is going to die—so we have that to look forward to.

HBO's Vice President of Drama, Francesca Orsi, told attendees at an INTV conference in Jerusalem this week that the remaining characters die "one by one" in the upcoming season. Oh, yay.

And those deaths are so heart-wrenching that the cast openly sobbed at the table read when their characters were taken out.

"None of the cast had received the scripts prior, and one by one they started to fall down to their deaths," she said. "By the end, the last few words on the final script, the tears just started falling down. Then there was applause that lasted 15 minutes."

Prepare your heart because you've been warned.

Related Story
Here's an Epic 'GOT' Season 8 Fan Theory
Kayleigh Roberts Contributor Kayleigh Roberts is the weekend editor at Marie Claire, covering celebrity and entertainment news, from actual royals like Kate Middleton and Meghan Markle to Hollywood royalty, like Katie Holmes and Chrissy Teigen.
Advertisement - Continue Reading Below
More From Culture
HBO Is Making Iconic Shows & Movies Free to Watch
Tim Gunn & Heidi Klum Also Wear PJs to WFH
Advertisement - Continue Reading Below
'Parasite' Is (Finally!) Coming to Hulu
The Best Teen Movies of 2020
Family Movies Both Grown-Ups and Kids Will Love
The Best Wedding Movies of All Time
Read 'Anna K' Even If You Didn't Read the Original
19 Most Underrated Films of All Time
The Music Podcasts We Keep Pressing Play On
Why You Keep Seeing "Until Tomorrow" on Instagram